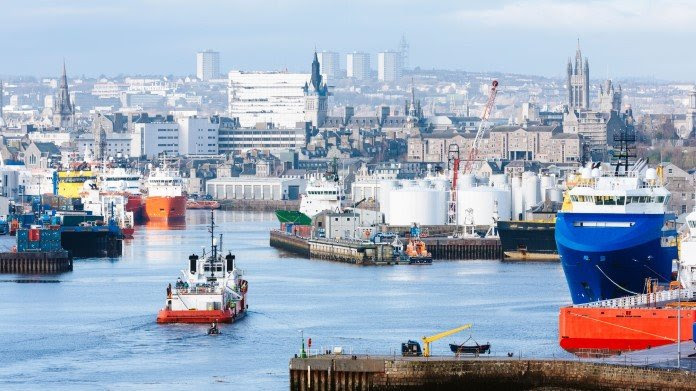 Aberdeen City Council and bp have today signed an agreement to form a joint venture partnership that will deliver a scalable green hydrogen production, storage and distribution facility in the city powered by renewable energy.

The Aberdeen Hydrogen Hub is to be developed in three phases in response to growing demands for hydrogen.

Phase one, which involves delivery of a green hydrogen production and transport refuelling facility powered by a solar farm, is targeting first production from 2024, delivering over 800 kilograms of green hydrogen per day – enough to fuel 25 buses and a similar number of other fleet vehicles.

Aberdeen City Council and bp – which will operate the joint venture under the name bp Aberdeen Hydrogen Energy Limited – have committed £3 million for initial design work with a final investment decision for the phase one facility build expected in early 2023.

Future phases could see production scaled up through further investment to supply larger volumes of green hydrogen for rail, freight and marine, as well as supply of hydrogen for heat and potentially export. This expansion would be enabled by the expected increased availability of local renewable energy sources, including developments that emerge from the ScotWind offshore wind leasing round.

A study commissioned by Aberdeen City Council on the growth in demand for hydrogen power estimates that if the hydrogen hub enables the export of renewable hydrogen, then up to 700 skilled jobs could be created in the hydrogen industry by 2030.

Aberdeen City Council Leader Councillor Jenny Laing said: “Today is a milestone in delivery of our hydrogen programme. We are now seeing the benefits of having our 2015 Hydrogen Plan in place that provided a clear statement on the scale of our ambition to deploy hydrogen power in Aberdeen.

“We were ahead of the game then, and it is impressive that seven years on, we have a developing hydrogen economy with 85 hydrogen-powered vehicles deployed across the city, refuelling infrastructure, and a joint venture company with bp to deliver the hydrogen production and distribution hub.

“That next phase will see scale production of green hydrogen in response to growing demand and maintains Aberdeen’s place at the forefront of the UK and Scotland’s transition to renewable energy.”

Partnering with cities and corporates as they shape their paths to net-zero is a core part of bp’s strategy. bp expects to partner with 10-15 cities globally by 2030 to provide innovative, integrated, ‎and decarbonised energy solutions at scale to help them achieve their goals of net-zero emissions. bp also aims to capture 10% of the low carbon hydrogen market in key geographies by 2030.

Louise Kingham CBE, bp’s UK head of country and senior vice president for Europe, said: “bp is investing across all the energy transition growth areas in the UK. In fact, we have committed to spend £2 in the UK for every £1 generated here out to the middle of this decade.

“Today’s announcement is evidence of that commitment in action and is supported by other ambitious plans to produce clean energy from UK offshore wind, develop carbon capture in Teesside and grow the country’s electric vehicle charging network.

“With these new business opportunities underpinned by our long-standing position in North Sea oil and gas, we are showing what an integrated energy company can do.

“And all of this couldn’t be possible without the skills and experience of a talented workforce and supply chain, eager to help make the UK’s net-zero ambitions a reality.”

Aberdeen City Council’s Convenor for City Growth and Resources Councillor Ryan Houghton added: “Aberdeen City Council has spent £7million to date to deliver a hydrogen programme that in turn has seen us lever in £35m additional investment from external partners. That sends a positive signal to investors that we are delivering our ambition, and a feature of our success is how industry has responded to the opportunity we have created.

“This joint venture with bp provides the city with the expertise to grow a supply chain, develop new skills and jobs and I believe this model will be an exemplar for how councils implement plans to reach net-zero.”

Dr Oliver Taylor, incoming chief executive for bp Aberdeen Hydrogen Energy Limited, said: “We’ve long held the view that the energy and mobility assets that cities control can drive change, so we’re delighted to be announcing this public-private joint venture. But we also believe that working with and within cities is key to achieving decarbonisation at scale.

“By working with key fleets in and around the city we’re aiming to stimulate demand for hydrogen and help the people and businesses of Aberdeen secure value through the energy transition.”

Aberdeen City Council embarked on its hydrogen journey more than 10 years ago and has already demonstrated how demand can be created within cities, using the zero-emission fuel to power a fleet of 25 buses, 60 public sector vehicles and waste trucks, as well as the P&J Live events complex. More than 2 million passengers have travelled on the city’s hydrogen buses, and CO2 savings to date are in excess of 100 tonnes over the past six years.