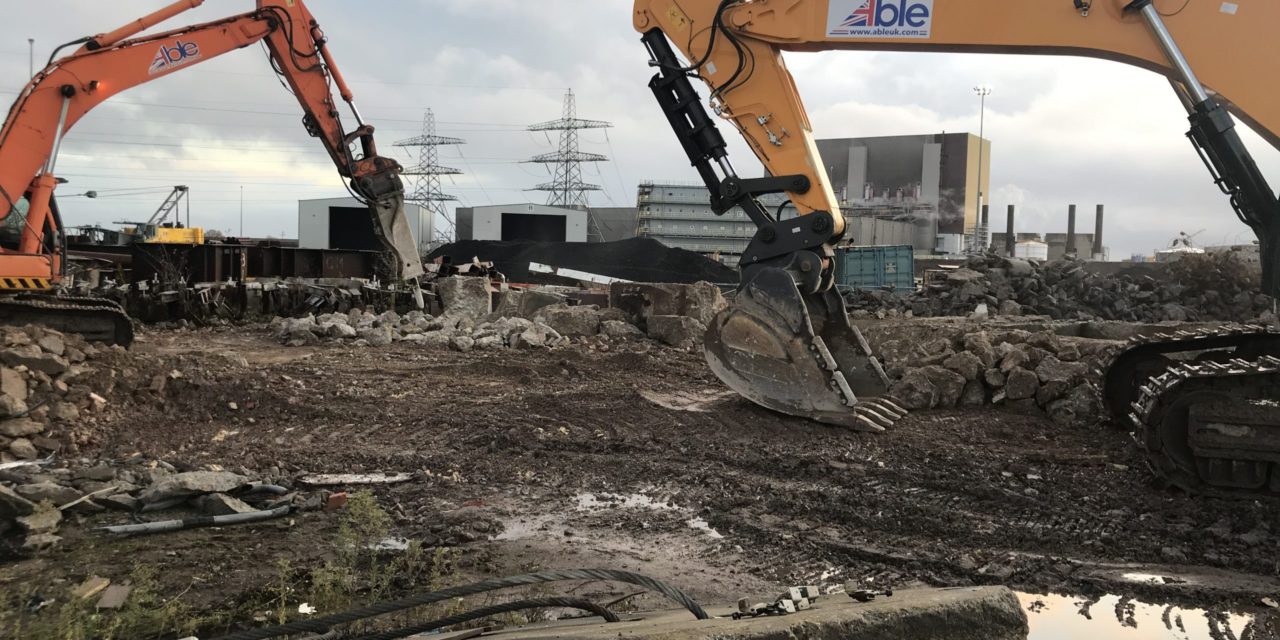 Preparatory works are underway to transform Able Seaton Port (Able) for its role at the heart of turbine installation for Triton Knoll Offshore Wind Farm.

Able Seaton Port was selected by MHI Vestas Offshore Wind in 2018 to be the offshore wind turbine pre-assembly base for the 857MW Triton Knoll Offshore Wind Farm.

The 90 turbine Triton Knoll project and MHI Vestas are jointly investing in the works at the Teesside facility, in a move that will further enhance the port’s skill set and its future business appeal.

Once the infrastructure work is complete, Able will be able to boast a full package of offshore wind farm capabilities, adding turbine handling to its existing experience of working with offshore foundations and major vessels.

Julian Garnsey, project director for Triton Knoll and innogy, said: “It has always been our aim as a project to use our investment to help regional and UK businesses increase their competitiveness in the global market. We’re therefore delighted to have been the catalyst along with MHI Vestas for Able’s progression into turbine handling.

“Looking ahead, the growth of offshore wind and the likely construction of so much new capacity off the east coast presents the region with a great opportunity to compete and bring new investment, growth and jobs into Teesside.”

Work began this month to prepare the existing site, establish new drainage and upgrade the internal electricity supply. It will be followed in the coming months by new infrastructure including access roads, office buildings and accommodation for a project team of around 50 people.

Turbine handling equipment will be established at the port later in the year, where the 89-metre-high turbine towers, 80-metre-long turbine blades and the 375-tonne nacelles will be prepared ready for transport to the offshore site and for installation.

MHI Vestas Offshore Wind are contracted to manufacture the wind turbines which will be installed on the project in 2021. It’s V164-9.5 MW turbines are among the largest currently operating anywhere in the world, each of which is capable of powering a house for 29 hours with just a single rotation of the blades.

MHI Vestas Vice President and UK Country Manager, Julian Brown, said: “Establishing Able Seaton in the River Tees as a construction base for offshore wind turbines has been a long time in development and we are delighted to be working with Triton Knoll project team and Able UK to bring this about. We believe Teesside will continue to grow its contribution to offshore wind construction and the supply chain, and MHI Vestas is pleased to play a lead role in that development.”

Able operates Able Seaton Port, and is looking forward to expanding its experience in the growing business sector. Offshore wind is at the heart of the UK’s policy to decarbonise its energy supply and is a rapidly growing global industry. Able’s new capabilities will help make it even more capable of challenging for future UK and European projects.

Able Seaton UK’s Peter Stephenson said: “We have enjoyed a long and constructive relationship with Triton Knoll and preparations for this exciting contract are now well underway. It reflects another massive vote of confidence in the UK, ourselves and the Teesside supply chain.

“The project effectively completes Able’s offshore wind CV and is very much the start of something that will continue to grow. Government policy is successfully enabling growth across the offshore wind sector, with much of that potential on our very doorstep, we certainly aim to build on this fantastic opportunity.”

Triton Knoll is a state-of-the-art, 857MW offshore wind farm, consisting of 90 of the world’s most powerful turbines, and representing a significant investment in new UK energy infrastructure. Located 32km off the Lincolnshire coast, Triton Knoll is the largest offshore wind farm currently in construction by innogy and when fully operational, will be capable of generating renewable energy equivalent to the needs of over 800,000 typical UK households.