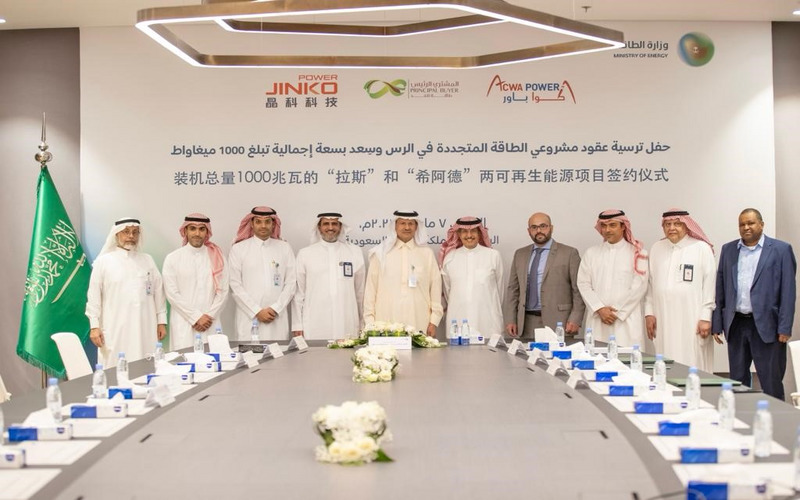 Under the terms of the agreement, ACWA Power will sell energy produced by the project to SPPC for a period of 25 years. Valued at US$450 million (SAR 1.7billion), Ar Rass is the largest PV project that has been tendered as part of Saudi Arabia’s National Renewable Energy Programme (NREP) to date, for which ACWA Power has been earmarked to deliver 70% of the total 58.7 GW target.

ACWA Power will hold a (40.1%) stake in the facility, along with (20%) by the Water and Electricity Holding Company (Badeel), a wholly-owned PIF Portfolio Company, and (39.9%) will be owned by the State Power Investment Corporation from China. When fully functional, the project will produce energy to power around 132,000 homes in central Saudi Arabia.

During the signing ceremony, the Minister of Energy announced that the energy sector aims to launch several renewable energy projects to produce approximately 15,000 megawatts of clean energy between the years 2022 and 2023, with the aim of diversifying the energy mix and achieving its designated targets.

His Royal Highness praised the relentless support of the Custodian of the Two Holy Mosques, King Salman bin Abdulaziz Al Saud, for his leadership and guidance in all areas that ensure the prosperity of the Kingdom and its citizens. His Royal Highness also expressed his gratitude for the support of His Royal Highness, Prince Mohammed Bin Salman Al Saud, Crown Prince, Deputy Prime Minister and Minister of Defense of Saudi Arabia, for his crucial role in empowering the energy sector, bolstered by his directives that drove the Kingdom to new heights. He emphasised that these newly introduced projects translate the Kingdom’s Vision 2030 into tangible outcomes, which ultimately contribute to reaching the Kingdom’s optimal energy mix and its shift from consuming liquid fuels in electricity production to gas and renewable energy.

As Saudi Arabia’s leadership ramps up its multi- gigawatt plans for diversifying its energy mix to include renewable energy, solar power is a key component in unlocking positive economic, environmental and social outcomes, whether it is for consumer use, or in mega-projects. At ACWA Power, we are proud to be part of this larger story and will work diligently to realising the multiplying effect of solar power, whether it is in job production or emissions mitigation. We thank our partners in the Ministry of Energy for entrusting us with this important project so that we can work in the delivery of our mission in providing responsible, reliable and affordable power,” said Mohammad Abunayyan, ACWA Power Chairman.

The Ar Rass IPP is expected to reach financial close in Q4 2022.

In the Kingdom of Saudi Arabia, ACWA Power currently operates Sakaka, a 300MW solar facility, and is also working on constructing Sudair, a 1500 MW independent solar PV project with Saudi Aramco and the Water and Electricity Holding Company (Badeel), a wholly owned PIF Portfolio Company, which is considered the largest of its kind in the Kingdom of Saudi Arabia and one of the largest solar energy projects in the world.