After successful load out, topside Hollandse Kust (north) is now in position for sea transport to Egmond aan Zee 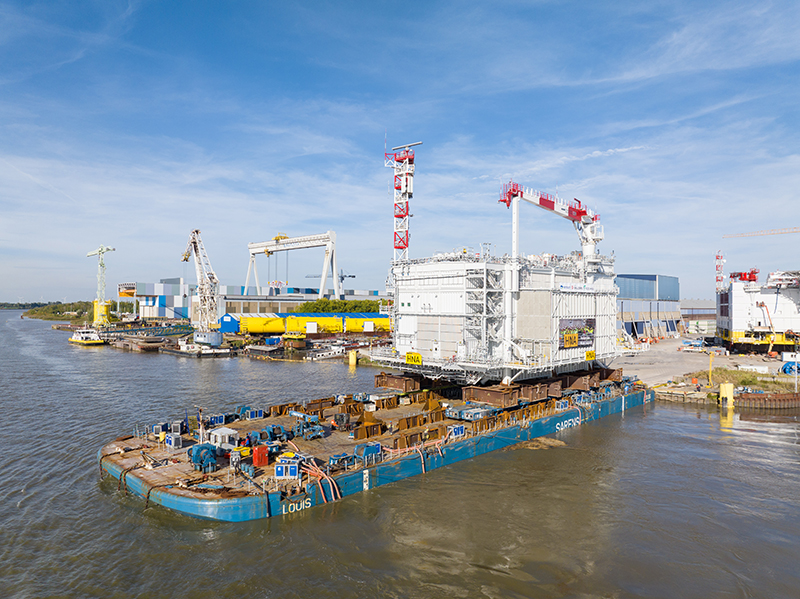 From EQUANS’ fabrication hall in Antwerp, the topside for TenneT’s Hollandse Kust (north) transformer platform was placed on a floating barge in the port on Monday. Following the load out, the over 3,500-tonne steel structure will be secured and prepared for transport to its final workplace at sea in the coming weeks.

During the load out, the topside for ‘North’ was carefully steered past its ‘cousin’ for the German offshore wind farm Baltic Eagle on Monday’s self-propelled trailers (SMTPs). The special transport then drove from the quay onto a floating barge. After this successful load out, everything will be prepared in the coming weeks for the sail away, which will take place in late September/early October. (video of the load out >> https://www.youtube.com/watch?v=l5UULnSJmEA)

“After a two-day sea voyage, the topside will then be installed 18.5 kilometres off the coast of Egmond aan Zee. There, the undercarriage (jacket) has already been firmly anchored to the seabed since November last year,” says Guus Siteur, offshore platform project manager for TenneT. “With the help of the installation vessel Orion, the topside of 47 metres long, 35 metres wide and 25 metres high will be placed on the undercarriage and then welded in place.”

Two years after the first steel cut, the topside, built by the EQUANS/Smulders combination, is ready to be installed. This makes it the first of the three topsides they are delivering. ‘North’ will be followed by ‘West Alpha’ and ‘West Beta’. According to project manager Siteur, the ‘north’ platform will be fully operational next year (2023), and operator Crosswind’s wind turbines can be connected to it.

From the offshore sockets, each with a capacity of 700 megawatts, TenneT will bring sustainably generated power to land in the coming years. “The sea cables for ‘north’ are already ready in the seabed. Behind the dunes near Heemskerk/Wijk aan Zee, these will be connected to the cables that will soon feed the power into the high-voltage substation along the A9 in Beverwijk. This part of the cable link will also be completed in the coming months,” Siteur said.