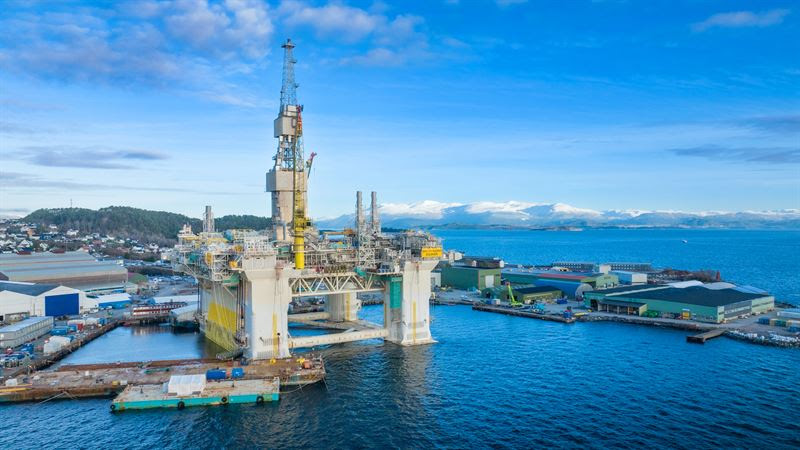 Following several years of extensive upgrades, the drilling and production platform Njord A is ready for handover to Equinor. Towing it back to the field has started, March 22. The project has provided more than 6,000 man-years in Norway and the Norwegian share of value creation from the project has been around 95 percent.

Njord A has been described as Norway’s largest renovation project. After the contract was signed on March 17, 2017, significant upgrades have been carried out on the hull and the platform deck to extend its lifetime for another 20 years of production.

“A refurbishment project is never easy, especially at this size and complexity, and with the addition of having to be carried out in the middle of a pandemic with a shortage of labour and a strict infection control regime. This makes me even more proud that we have now reached this important milestone. However, I am most proud that we have carried out this large scope of work at our Stord yard without a single serious injury to either people or material,” said Sturla Magnus, executive vice president and head of Aker Solutions’ topside and facilities business.

The upgrade of Njord A has been a project with very high local content in Norway. The engineering was performed mainly by Aker Solutions’ offices in Bergen, Stavanger, Fornebu and Trondheim. The construction has been carried out at the company’s yards at Stord and Verdal. Close to 400 different supplier companies have been involved in the project, most of them Norwegian.

“Njord A is now ready for several decades of energy production and value creation for the greater society. The project has had significant ripple effects, contributing to a lot of activity both for Aker Solutions and a large number of supplier companies which in various ways have contributed to the project,” said Magnus.

The Njord A contract was a groundbreaking undertaking in the Norwegian oil and gas industry when it was originally signed in 2017, being the first time a production platform on the Norwegian continental shelf was transported to shore for complete overhaul and upgrades. This has been reflected in terms of the increased scope and duration of the project during the project period. In 2018, an additional contract was awarded to Aker Solutions to prepare the platform for receiving oil and gas from the Fenja field, which entailed additional manufacturing and installation work on the platform. The company has also been tasked to assist Equinor in the offshore hook-up work preparing it for the start of production in the fourth quarter of 2022.

Njord A was originally delivered by Aker Solutions in September 1997. The platform deck was manufactured and assembled at the Stord yard, while the hull was constructed at the Verdal yard. Njord A was the first EPC contract on the Norwegian continental shelf following the implementation of the NORSOK standard in the mid-90s.

In recent weeks, the platform has been in Klosterfjorden on the west coast of Norway, conducting various sea trials.

“The sea trials are now complete, and we are on schedule for delivery and tow out to the field. Compared to the original version of the platform delivered in 1997, it is a quite different platform that is now ready to be transported back to the Njord field. Hardly any part of the platform has remained untouched, and the total dead weight has increased by 23 percent. The upgrades on the hull have increased the platform’s buoyancy by 24 percent, and the payload capacity on the platform deck has increased by 31 percent,” said Carl van der Hagen, project director at Aker Solutions, who was also involved in the construction of the original platform in the 90s.