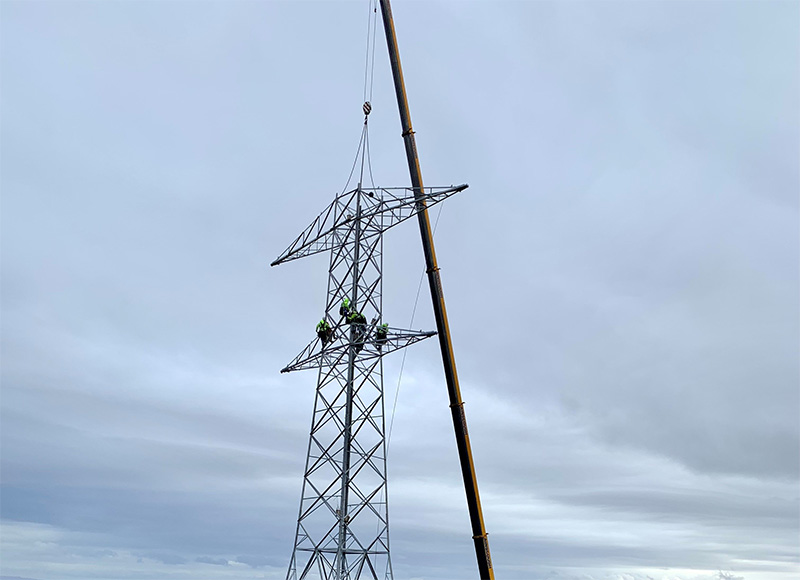 A major milestone has been reached in developing SSEN Transmission’s multi-million-pound powerline construction between Port Ann and Crossaig, with over half of the 148 towers now in place.

The 148 steel lattice towers are part of the new electrical transmission overhead line, which will replace the existing infrastructure in the area, which was originally built in the 1950s and is now reaching the end of its operating life.  The new replacement powerline is one of the region’s most significant electricity network investments in decades. It will provide a new robust, reliable transmission network in the area.

The process of installing the towers involves creating a robust foundation at each tower location, followed by erecting the steel lattice frames of the tower in sections using a large crane. The crane manoeuvres each section into position, and a team of engineers, harnessed to the towers, fixes and anchors each piece into position.  So far, 75 of the 148 towers are fully erected, with the remaining 73 expected to be completed by spring next year.

Once the towers are installed, a total of 270km of overhead line wires will be pulled into position on the towers between Lochgilphead and Crossaig. Since September, over 70km of wires have already been installed by teams using a combination of helicopters and large conductor-pulling machinery.

The project is the second phase in the wider Inveraray to Crossaig powerline upgrade, with the first phase – Inveraray to Port Ann – energised in July 2021.  Since then, teams have been working to reinstate the land and some of the access areas used in construction for the first phase.

Watch: Learn more about SSEN Transmission’s land reinstatement and restoration process in the video below!