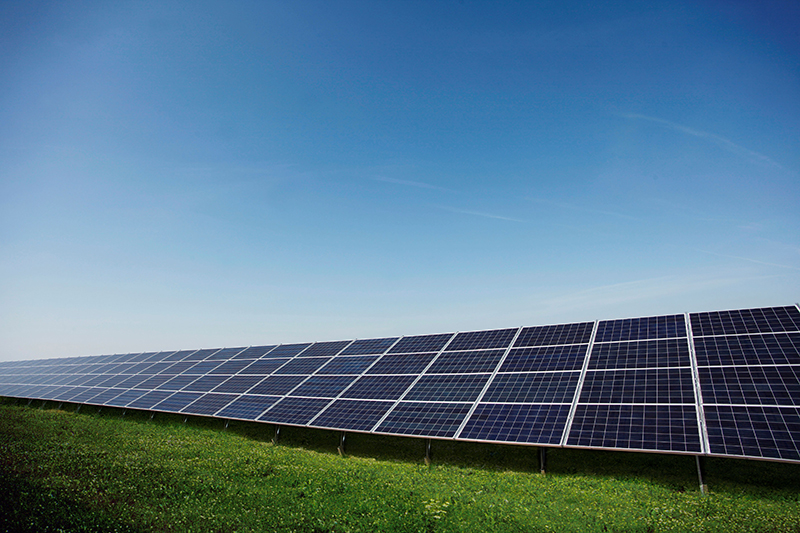 BayWa r.e. has been selected by the Community of Communes of Haute-Saintonge, a positive energy district committed to the development of renewable energy, to implement an ambitious energy transition project in the department of Charente-Maritime in the South West of France.

This flagship project will combine solar power production with a battery storage system and community participation. Green hydrogen production will also be added if local offtake and utilisation opportunities are confirmed. The project will thus implement a holistic approach to the local energy transition and support the region on its low-carbon journey.

BayWa r.e. has been selected, together with Lhyfe, a pioneer and major player in renewable green hydrogen, to support the Community of Communes following a call for expression of interest procedure to develop a photovoltaic (PV) park.

BayWa r.e. will lead the development of a 40 MWp PV park with an annual production of 52 GWh and implement a battery storage system. Lhyfe will be responsible for developing a green hydrogen production unit powered by the solar park. The renewable hydrogen has the potential to be sold to industrial players, local authorities, associations or school and urban transport within a 100 to 150 km radius. This potential will be confirmed through a one-year study on local use.

The PV power plant will be coupled with an energy storage system. This will enable the plant to be optimally integrated into the grid by capturing excess solar production and effectively using the electrical infrastructure. In addition, it will contribute to securing the electricity supply, particularly during the peak winter period.

“BayWa r.e. wants this project to be a showcase of innovation in France that highlights the benefits of combining flexibility tools with renewable energy production. We are committed to demonstrate the technical feasibility of the project, but also its economic relevance with regard to all the services provided,” explained Mathieu Bordeleau, Director of Innovation at BayWa r.e. France.

BayWa r.e. has offered that the local authority should invest in the project during the development phase and become a majority shareholder during the construction and operation. The financial benefits resulting from this investment would be added to the economic and fiscal benefits following the implementation of the solar park.

“BayWa r.e. is very proud to have been selected by the Community of Communes of Haute-Saintonge to carry out, together with Lhyfe, a resolutely innovative territorial project combining solar energy, hydrogen and storage at the same site. This project will be a blueprint for regions that want to actively take part in the energy transition, especially as an investment opportunity for local authorities”, commented Céline Tran, Managing Director of BayWa r.e. France.

Innovative projects like Haute-Saintonge, which integrate storage technology and hydrogen into renewable power generation, will be important in driving the energy transition forward. BayWa r.e. is also exploring other development opportunities in this field in Europe and beyond.