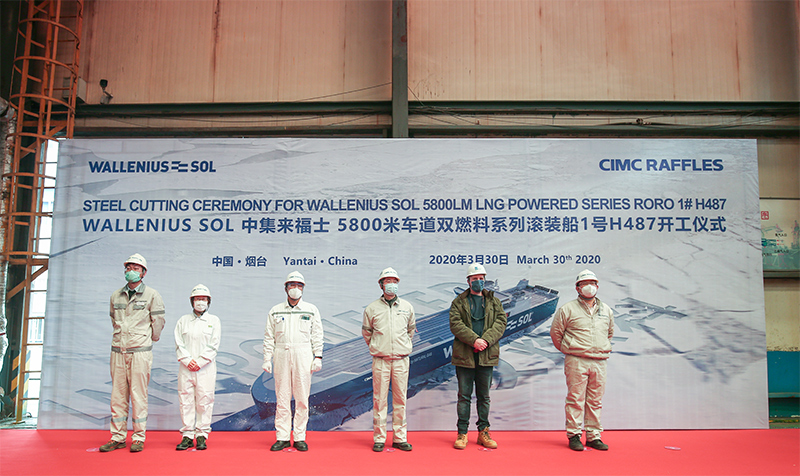 On 30 March 2020, with activating the push button of the steel cutting machine in the Yantai shipyard, CIMC Raffles formally starts the construction of No.1 vessel of the world biggest LNG powered, 5,800 LM series MegaRoRo NewBuildings which were ordered with two firm and two optional vessels.

This series MegaRoRo vessels officially entered into force on 18 April 2019 are the world biggest LNG powered and ice class NewBuildings as well as CIMC Raffles’ first international order in the related new business area. The project concept was developed by Danish Naval Architect Knud E. Hansen (KEH), one of most professional Naval Architects and Engineering companies in the industry and classified by Lloyd’s Register with flying Swedish Flag. And the vessels are characterized as 241.70m long, 35.20m wide with 5,800 lane meters and 20 knots speed, will equip with two Type C LNG tanks with capacity of 685 cubic meter each. To be operated in harsh weather environment European waters up to ice thickness 1.0 m, the vessels will meet Finnish-Swedish ice class 1A Super and winterization requirement.

Through the design and all other construction related preparation including close working among CIMC Raffles, designer, suppliers as well as Class Society leading by WALLENIUS SOL during the past nearly one year, the project now formally enters into the construction process with optimal tank test of the vessel.

“Even though the project execution like technical communication and supply chain negatively influenced by the spreading Coronavirus outbreak, we now formally start the vessel within schedule which provide the solid base of the project’s delivery on time. During the earlier phase of great support and positive cooperation from Owner, Class Society, Design Company and suppliers thoroughly, we all make a good and sufficient constructing preparation under the serious epidemic situation.” addressed by Mr. Ni Tao, executive vice president of CIMC Raffles.

The one-time starting of the project construction enhances the development base of CIMC Raffles’ international RoRo main-stream market as well as the staged milestone of further approach to high-end RoRo and RoPax new business.