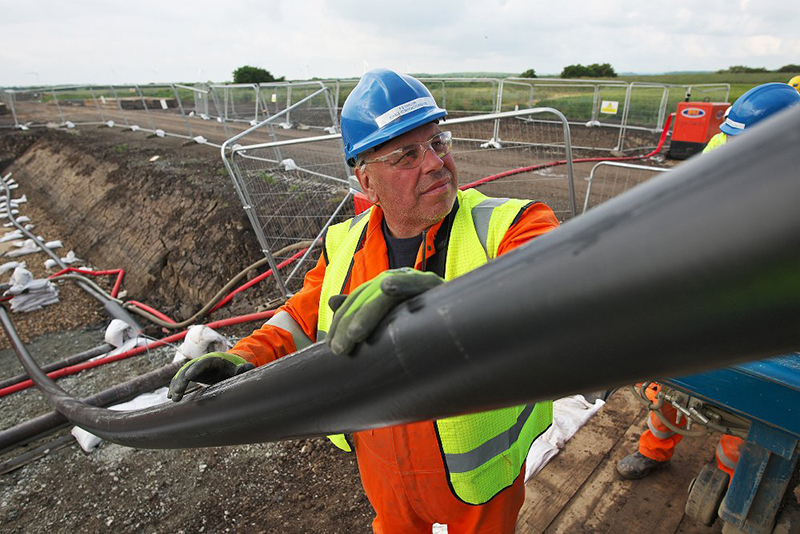 The team building Dogger Bank Wind Farm has safely installed almost 73 miles of HVDC underground cables in East Riding of Yorkshire in another giant milestone for the world-leading project.

Onshore construction for the first two phases of Dogger Bank Wind Farm began in January 2020 when Jones Bros Civil Engineering broke ground near the village of Ulrome in East Riding of Yorkshire.

Jones Bros commenced installation of the cable ducting system in spring 2020, with the support of Essex-based Joseph Gallagher undertaking a series of horizontal directional drills in preparation for cable installation works to begin last summer.

This latest milestone marks the completion of HVDC cable installation work in East Riding, with the team now focusing on the installation of around four miles of HVAC cable from its convertor station site near Beverley, to the Creyke Beck electricity sub-station near Cottingham.

Work is also underway to reinstate the land to its former condition, following completion of this part of the programme.

Onshore project manager for Dogger Bank Wind Farm, Oliver Flattery, said: “The whole team has worked incredibly hard and diligently since the start of 2020 to safely and efficiently prepare the 30km route, through a combination of trenching and drilling methods, before installing protective ducts and then feeding 3,362 tonnes of underground cables through these ducts.

“This has been a huge undertaking, and one we’re all proud to have been part of.

“We thank local residents and businesses in East Riding of Yorkshire for their patience and understanding over the last 2 years while this work has been taking place.”

The world-class renewable energy project, which will be capable of powering 6 million UK homes annually on completion, is a joint venture between SSE Renewables (40%), Equinor (40%) and Eni Plenitude (20%).

The electricity generated by the Dogger Bank A and B wind turbines will come ashore south of Bridlington at Ulrome in East Riding, and be transmitted via underground HVDC cables to the onshore convertor station site in East Riding.

The HVDC cable route ends at the convertor station site near Beverley, where two convertor stations are currently under construction. Here, the electricity will be converted from HVDC to HVAC current for transmission to homes and businesses via the UK grid network.

The Dogger Bank project is the first offshore wind farm in the UK to use HVDC technology, which allows electricity to be transmitted efficiently across long distances.

Jones Bros project manager James Lockwood said: “Hitting this key milestone on the world’s largest offshore wind farm has been made possible thanks to the efforts of every individual on site.

“I know it brings everyone from senior managers to trainees and apprentices a great sense of pride to be associated with this project, and we’re excited to see how the rest of the scheme develops.”

Nigel Baldwin, Health and Safety Director for F B Taylor, said: “Working on the largest offshore wind farm has been a humbling experience for all involved and something that we are immensely proud of. We would like to thank the full site team for their work ethic and support during this project and hope to be involved with many more offshore opportunities throughout the coming years”.

Jonathan Stock, Head of Projects for Powersystems UK, said: “We are very pleased to announce the completion of the HVDC cable installation at Dogger Bank Wind Farm, the world’s largest offshore windfarm. This is a huge achievement for all involved and particularly the efforts of the Powersystems UK team, our supply chain partners FB Taylors and Collett Transport and partners Jones Bros.

Tony Matheson, Director at Joseph Gallagher Limited, said: “This has been a fantastic project to work on over the past two years.  Our team have been instrumental throughout, operating four horizontal directional drilling rigs simultaneously during peak times, installing an impressive 27km of duct in 140 drills – ranging from 50m to 620m and then returning to grout the cables after the install.

“It’s been a true collaborative effort working with Jones Bros throughout the project. The team’s work ethic shone through helping to deliver the project to programme and with safety at the forefront – something we are very proud to have been part of.”

Offshore construction work on the project’s first two phases began in April with the start of work to install sub-sea HVDC cables off the Yorkshire coast. And in July the project celebrated the successful installation of the first foundation in the North Sea. Next year the team will install the first turbine on Dogger Bank A, with a total 277 GE Renewable Energy Haliade-X turbines set to be installed on all three phases of the project by 2026.

Onshore work is also underway on the third phase of the windfarm in the Tees Valley, where the project is collaborating with neighbouring Sofia Offshore Wind Farm, owned by RWE, to minimise disruption to the local community. 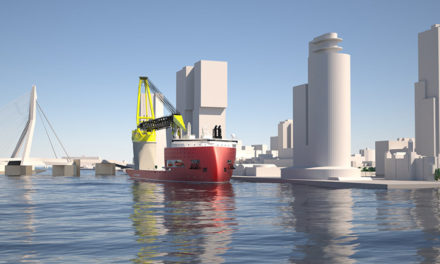