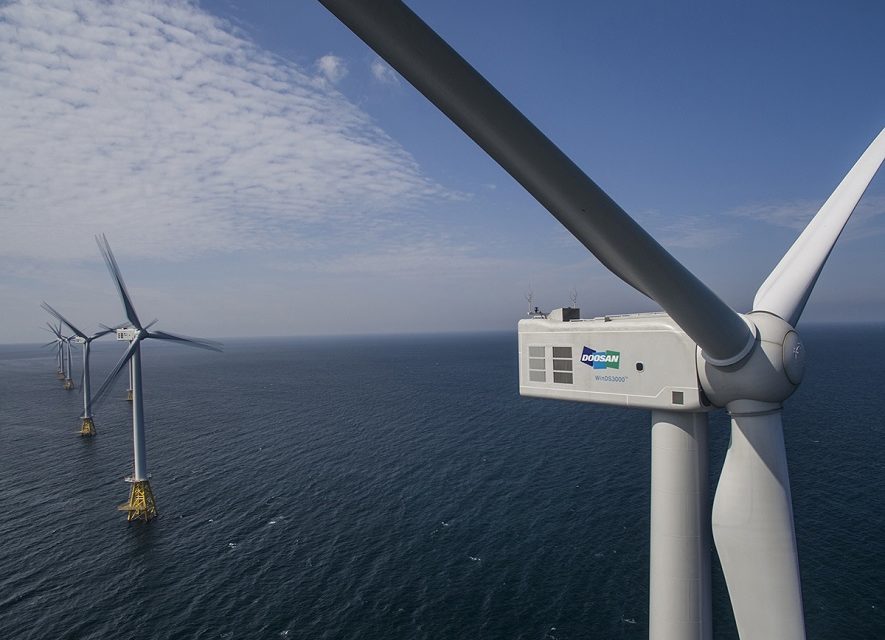 Doosan Heavy Industries & Construction, the company with the longest track record in Korea’s offshore wind power sector, has once again proven its competitiveness in this field by recently winning the contract to supply the equipment for Korea’s largest offshore wind farm.

On June 7th, Doosan announced that it had signed a contract with KEPCO Engineering & Construction (KEPCO E&C) to supply the equipment for the 100MW Jeju Hallim Offshore Wind Farm. Doosan had been selected as the preferred bidder back in 2019 based on the results of the technical review and price evaluation of the suppliers’ bids. With the signing of this contract, Doosan will be supplying 18 units of a 5.56MW offshore wind turbine. The contract is valued to be approximately 190 billion won and Doosan will also be signing a long term service agreement on providing maintenance services for the wind turbines after construction.

The Jeju Hallim Offshore Wind Farm project will be set up near the waters of Hallim Port, which is located in the Northwest region of Jeju island. The project is owned by the client Jeju Hallim Offshore Wind Power Company, which was formed by Korea Electric Power Corporation (KEPCO), Korea Midland Power (KOMIPO), Hyundai Engineering & Construction (Hyundai E&C) and KEPCO E&C. The EPC work will be performed jointly by Hyundai E&C, KEPCO E&C and Korea Leading Energy Management (KLEM), while Doosan will be handling the manufacturing, supply and maintenance of the wind turbines. The overall construction is slated to be completed by April 2024.

The 5.56MW offshore wind turbine being supplied by Doosan is a large-sized product with a blade that is 68 metres long. It is designed so that it can withstand even severe windstorms with a wind speed of up to 70 m/s. In fact, the prototype that had been installed in Jeju’s Kimnyoung had managed to maintain normal operations even when the region was hit by the Typhoon Chaba in 2016, with winds blowing at a maximum speed of 56.5m/s. Doosan’s 5.56MW offshore wind turbine model received the UL certification in 2019.

“We find it truly meaningful to be a part of the Jeju Hallim Offshore Wind Farm project as this is not only Korea’s largest offshore wind farm project, but it is also the first offshore wind farm project to be pursued in Korea since the government announced its Renewable Energy 3020 Plan,” said Inwon Park, CEO of Doosan Heavy’s Plant EPC Business Group. He added, “We will do our utmost to ensure the successful completion of the project, so that we may once again demonstrate the competitiveness of South Korea’s offshore wind power, and we will also endeavour to promote the domestic wind power industry.”

Doosan Heavy finished constructing its second wind turbine shop at its Changwon headquarters early this year and is preparing for an increase in the domestic offshore wind power business by securing additional manpower for this field. Doosan currently owns 3MW and 5.5MW offshore wind turbine models and has plans to commercially launch an 8MW model in 2022. The percentage of the local manufacturing of parts, which had initially been around 30%, has also risen rapidly to become more than 70% these days. Doosan has constantly sought to promote the growth of other related industries as well, which is what led to its numerous partnerships with around 400 local companies in the wind power sector.