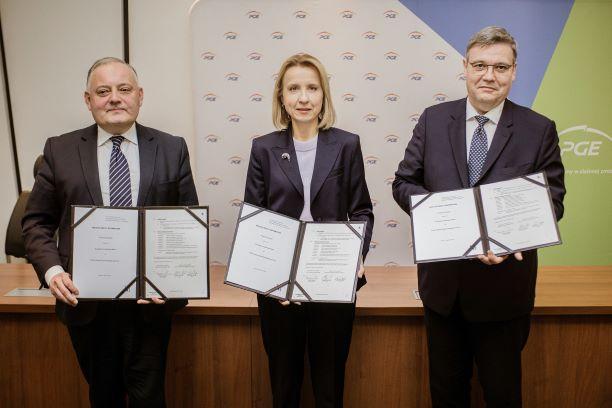 The European Investment Bank (EIB) and PGE Polska Grupa Energetyczna S.A. (PGE) have signed a PLN 2 billion financing agreement to support the group’s strategic project to develop and modernise transmission network infrastructure and its integration with renewable energy sources. The direct beneficiary of the financing will be PGE Dystrybucja S.A., a PGE company responsible for operating the distribution network.

The funds obtained will be used for investments in lines, transformers, digital communication, energy storage and modern metering, enabling PGE’s distribution network to be adapted to connect newly emerging renewable energy sources. The implementation of the investment is planned to take place from 2022 to 2025. The project is part of the implementation of PGE Group’s strategy, and one of its key goals is transforming the Polish energy sector into a zero-emissions model.

Accelerating the energy transformation is a priority, which is why the EIB Group and the European Commission established the REPowerEU initiative. This aims to make the European Union independent of Russian energy resources and move the EU energy sector towards renewable energy. The agreement with PGE S.A. will accelerate the transformation of the energy sector in Poland, with projects implemented in the voivodeships covered by the EU cohesion policy (Małopolskie, Warmińsko-Mazurskie, Łódzkie, Świętokrzyskie, Lubelskie, Podkarpackie, Podlaskie and Mazowieckie). It will also strengthen the labour market in these regions.

EIB Vice-President Teresa Czerwińska said: “The energy transformation is a priority for the EIB, as it is a major goal for Poland and the entire European Union. That is why we are proud to support PGE Polska Grupa Energetyczna in its strategic plan to modernise and develop the distribution network. Modern transmission networks will enable the integration of renewable energy sources, which will strengthen the diversification of the energy sector in Poland. The EIB, as the EU bank, will make every effort to ensure that Poland and Europe can become independent of fossil fuels and carry out the transformation of the EU energy sector as efficiently as possible.”

PGE’s cooperation with the EIB is a good example for all financial institutions in Poland on how to finance the energy transformation. Let us remember that the transformation of the energy sector is not only the implementation of climate goals, but also ensuring the security and independence of the Polish energy sector. Investments in the distribution network are an essential element of implementing this strategy. This will ensure efficient and effective management of electricity generation from RES, as well as its storage and delivery to customers,” said Wojciech Dąbrowski, President of the Management Board of PGE Polska Grupa Energetyczna. – Thanks to the funds obtained from the EIB, PGE will prepare the grid to connect the ongoing and planned wind and photovoltaic investments,” – adds Wojciech Dąbrowski.

PGE Polska Grupa Energetyczna is the largest energy company and producer of green energy in Poland and a national leader in energy transformation. In its strategy, the PGE Group presented a transformation plan and a path to the decarbonisation of generation and, as one of the first in the region, announced the goal of climate neutrality by 2050. The investment plan of the PGE Group includes the construction of the country’s largest wind farms in the Baltic Sea. Two offshore PGE farms with a total capacity of 2.5 GW are to be built by 2030 and at least 1 GW after 2030. PGE’s strategic goal is to have at least 6.5 GW of installed capacity in this technology by 2040. By 2030, the PGE Group will also build 3 GW of new photovoltaic capacity, expand its portfolio of onshore wind farms by at least 1 GW, and build at least 800 MW of energy storage facilities, increasing the possibility of connecting renewable energy sources and improving the reliability of power supply. PGE was the first Polish energy company to commit to reporting its carbon footprint in all three areas.

The European Investment Bank is one of the world’s leading climate action and environmental sustainability financiers. In 2021, the share of EIB investments dedicated to climate action and environmental sustainability increased to €27.6 billion. As the EU climate bank, the EIB is committed to supporting the European Green Deal, helping Europe become the first carbon-neutral continent by 2050, and contributing to the United Nations Sustainable Development Goals.

Promoting cohesion has been a priority for the European Investment Bank since its creation in 1958. In the last long-term budget of the European Union (2014-2020), the EIB Group supported investments worth around €630 billion in cohesion regions, equivalent to around 16% of EU GDP. In 2021, Poland was the largest beneficiary of financing for cohesion regions by the EIB Group — this financing amounted to €4.5 billion, with 23% of this funding fuelling Poland’s sustainable energy transition.