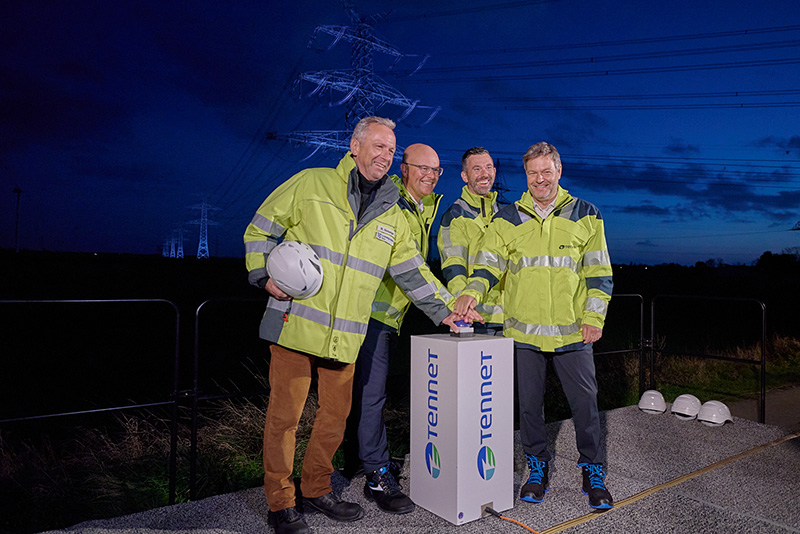 Robert Habeck, Federal Minister for Economic Affairs and Climate Protection, Schleswig Holstein’s Energy Transition Minister Tobias Goldschmidt, TenneT COO Tim Meyerjürgens and SH-Netz Supervisory Board member Matthias Boxberger have put the fourth, 38-kilometre section of the west coast line into operation at the Klixbüll/Süd substation (Nordfriesland district). When they symbolically pressed a button together, the new masts near the substation were illuminated in colour for a brief moment. The event occurred in the presence of numerous representatives from business and politics.

Robert Habeck: “The west coastline is often referred to as the “main artery of the energy transition in Schleswig-Holstein”. But it is not only important for Schleswig-Holstein. The new line improves the integration of renewable wind power. With the completion of the last section next year and the connection to Denmark, we will also advance the integration of the European electricity market. The current situation, in particular, is showing us again how important European cooperation and solidarity is. The basis for this is cross-border infrastructure such as the west coastline.”

Tobias Goldschmidt: “For Schleswig-Holstein, the west coastline is both an important climate protection infrastructure and a development axis. That’s why I’m pleased that today’s commissioning of the fourth section of the west coast line brings us another 38 kilometres closer to the energy transition. In these challenging times in terms of energy policy, we have now reached an important milestone and are gradually freeing ourselves from our dependence on fossil fuels.”

Tim Meyerjürgens: “The west coast of Schleswig-Holstein plays a central role in the energy transition in Germany. For the north, the west coastline is a real “game changer” on the way to independence from fossil fuels. With this line, we collect the wind power off the coast and thus ensure both the regional supply and the transport of green power to the south. With the fourth section, which went into operation today, green electricity is already flowing on 121 of around 140 line kilometres. Especially before the upcoming, particularly challenging winter, every kilometre of additional grid expansion helps to ensure grid and supply security.” Tim Meyerjürgens emphasised that the project will then be completely completed with the fifth and final section in about a year.

Matthias Boxberger: “As SH Netz, we are investing almost 50 million euros for new 110,000 volt lines and substations in the 4th construction phase of the west coastline alone, thus contributing to further grid expansion. And demand continues to grow with the expansion of renewable energies: we expect onshore wind power to more than double to around 15,000 MW and photovoltaics to increase almost tenfold to around 15,000 MW by 2030 political goals still almost 8 years time. That’s why we need easier planning and better coordination of system and grid expansion in order to avoid forced shutdowns like in the past in the future.”

background
The west coastline is divided into five project sections from Brunsbüttel to the Danish border with five network connection points. A new 380 kV overhead line is being built in a new route for the west coastline, which is almost 140 kilometres long. The aim of the new building is to achieve an increase in transmission capacity for transporting wind power away. About a year after the commissioning of section 3, section 4 (Husum/North-Klixbüll/South, 38 km, 103 pylons) was put into operation today. This means that the current on the west coast flows south for a total of 121 kilometres. Of all sections of the west coastline, the 4th section has the highest deadweight percentage of the 110 kV line of SH Netz, namely 90 percent. After the 4th section has now been commissioned, the dismantling and recycling of 104 old masts in this area will begin.

Section 1 (Brunsbüttel – Süderdonn, around 14 kilometres) has been operating since December 2016. The dismantling of the previously existing 110 kV line in the area has been completed.

Section 2 (Süderdonn – Heide/West, around 23 kilometres) was implemented in 2019. The dismantling is also completed there.

Section 3 (Heide/West – Husum/North, around 46 kilometres) was put into operation in September 2021 and takes the existing 110 kV line with it for almost 32 kilometres, which means that 96 old 110 kV pylons could be dismantled.

The completion of section 5 (Klixbüll – border Denmark, about 18 kilometres) is planned for 2023.