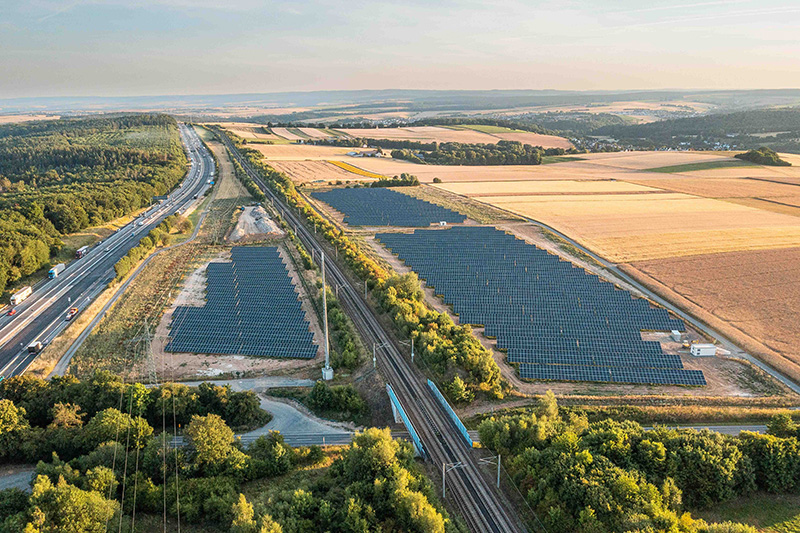 Just over a year after the municipality of Bad Camberg passed the statute for the solar park, another building block for the energy transition has been completed. EnBW’s first solar park in Hesse is located directly on the A3 motorway near Bad Camberg. On Friday afternoon (October 14th), EnBW inaugurated the new solar park together with Hesse’s environment minister Priska Hinz, district councilor Ruprecht Keller, mayor Jens-Peter Vogel and citizens from the region.

The approximately four megawatt system in the Limburg-Weilburg district generates solar energy that can cover the annual electricity requirements of around 1,550 households. It is divided into three solar fields. The railway line running along the A3 runs between the solar fields. If you take the train from Frankfurt am Main to Limburg an der Lahn, the route leads right through the solar park near Bad Camberg.

In her words of welcome to the guests, Environment Minister Priska Hinz explained: “We have a clear goal: the country wants to be climate-neutral by 2045 at the latest. The further expansion of solar energy is an important element in achieving this goal. In addition to the performance of solar energy for climate protection, the war in Ukraine makes it very clear that we must get rid of fossil fuels even faster. For the urgently needed energy transition, 10,000 – 15,000 hectares of land are needed for large-scale PV systems across the country. The municipalities must make suitable areas available for this as part of the land use planning. It’s good to see Bad Camberg leading the way here!”

At the inauguration, Michael Class, who is responsible for developing the generation portfolio at EnBW, emphasised how important every single kilowatt hour from renewable energies is. “In order to make Germany a little less dependent on imports of fossil fuels, we have to at least triple the expansion of renewables from today. For this we still need simplified and faster approval procedures that can be applied in practice and are also used.” By the end of 2025, EnBW wants to cover half of its generation portfolio from renewable energies.

District Administrator Michael Köberle, who was represented on site by Ruprecht Keller, welcomes projects such as the new solar park near Bad Camberg, as they make you independent of energy supplies and also make a contribution to climate protection.

On a construction area of ​​around 5.5 hectares, 8,970 solar modules generate around 4.5 million kilowatt hours of solar energy, which can cover the annual electricity requirements of around 1,550 households. This saves around 2,800 tons of carbon dioxide (CO 2 ) per year. For comparison: one hectare of forest binds around 10 to 13 tons of CO 2 per year.

For greening as extensive grassland, EnBW recently sown the entire project area (around 6.6 hectares) with native seeds between and under the modules. In the course of autumn she still plants hedges and shrubs. In this way, the facility blends in better with the landscape and offers a protected habitat for plants and animals.