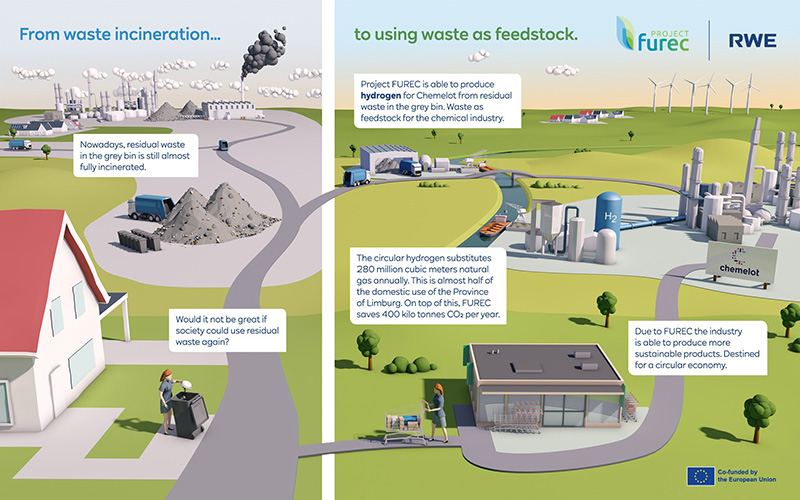 The funding by the EU Innovation Fund marks a key milestone for advancing the FUREC project, which will require an investment of more than €600 million to complete. With the funding commitment secured, RWE forges ahead with project development at full speed, including seeking the necessary approvals and permits. In parallel, the company is starting to contract preferred suppliers for the plants, potential customers for hydrogen and CO2, and companies that can provide waste of suitable quantity and quality. A final investment decision is to be made in 2024.

As part of the FUREC project, RWE plans to build a pre-treatment plant in Zevenellen, Limburg, to convert non-recyclable municipal solid waste (MSW) into solid recovered fuel pellets. The plant will process about 700,000 tonnes of MSW per year, of which about 50% will be of biogenic origin (e.g. textiles, paper). This is equivalent to the amount of MSW produced by approximately two million people yearly.

The feedstock pellets from the pre-treatment plant will then be converted into hydrogen in a second RWE plant which the company is to build at the Chemelot industrial park in Limburg. The plant is expected to produce 54.000 tonnes of hydrogen per year. For comparison: This is equivalent to the output of a 700-megawatt offshore wind farm with coupled electrolysers.

Using this hydrogen, the Chemelot industrial park in Limburg will reduce its natural gas consumption by more than 280 million cubic metres per year. This corresponds to half of the annual domestic gas consumption in Limburg. This will save around 400,000 tonnes of CO2 per year. The CO2 released during hydrogen production is captured and can be stored or possibly used as a raw material by industry in the future. The hydrogen will either be marketed locally in the Chemelot industrial park or transported to Rotterdam and the Ruhr area industrial companies. FUREC is preparing the necessary grid connections to the hydrogen and CO2 infrastructure.

FUREC receives funding from the EU Innovation Fund, which is 100% financed by the
EU Emissions Trading System (ETS). The Fund is expected to provide around €38 billion of support for the commercial demonstration of innovative low-carbon technologies over the period 2020-2030 to bring to market industrial solutions that will help decarbonise Europe and support its transition to climate neutrality.

Important driver for economy in Europe

FUREC is a game changer in CO2 reduction, hydrogen production and waste management:
it facilitates unlocking the massive potential of the circular economy to meet the EU’s climate targets. RWE sees FUREC as a blueprint for future roll-outs at other sites in the Netherlands and Europe. The province of Limburg, where Chemelot is located, has followed the development of FUREC with great interest in recent years.