Five Boralex solar projects selected during a call for tenders 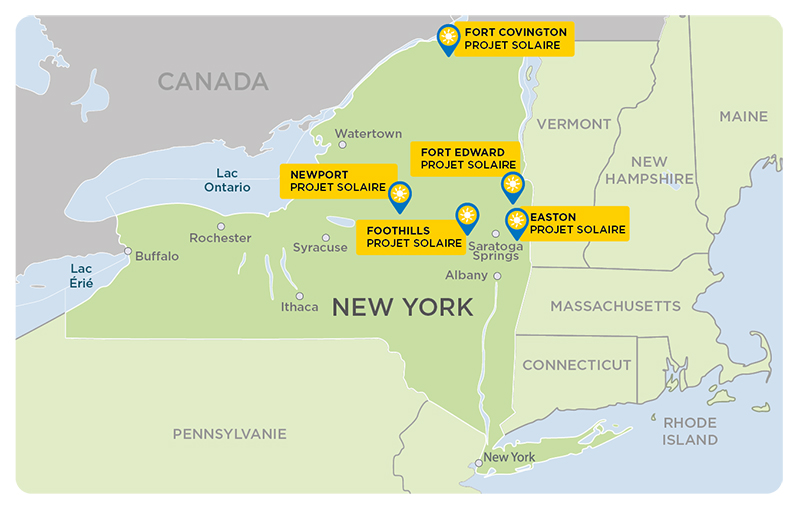 Boralex Inc. announced that five solar projects totalling 540 MW of electricity generation and 77 MW of storage have been selected by the New York State Research and Development Authority in its 2021 commercial renewable energy credits tender. Once built, these sites will produce more than 1 TWh of solar electricity each year, enough to power 141,200 homes per year.

Each of these projects provides economic, social and environmental benefits, both locally and for the state as a whole. The development, construction and operation of these facilities will create jobs, stimulate the local economy and generate significant tax revenue for local cities, counties and school districts.

In addition, in line with the company’s environmental, social and governance priorities, Boralex created the Beyond Renewable Energies fund to provide significant support to the communities hosting our projects and to those who are disadvantaged. For the duration of the operation of our facilities, resources are provided to our local partners who are dedicated to science, technology, engineering and math education and workforce development programs.

“Today’s announcement reinforces Boralex’s role in the New York State energy market during this critical period of expansion in renewable electricity generation,” said Patrick Decostre, President and Chief Executive Officer of Boralex. “These projects showcase the strategic and creative approaches to solar farm development as well as the community engagement that we are known for. I am proud of the Boralex team and its efforts to generate clean, competitive energy.

To support New York State’s goal of 70% renewable electricity by 2030, NYSERDA launched a fifth Request for Proposals in April 2021 to purchase qualifying renewable energy credits. of Tier-1. These credits represent renewable electricity entering the electricity grid. Each credit is equivalent to the environmental properties of one-megawatt hour of electricity produced by a renewable source, such as solar. Today’s announcement initiates a process allowing Boralex and NYSERDA to enter into 20-year agreements under the Renewable Energy Standard for the purchase of renewable energy credits associated with the energy production of the selected projects. The energy associated with these credits must be consumed in New York State. The price of the credits will be indexed to a benchmark energy and capacity price, which will cover the projects’ market energy and capacity revenues, removing the need for a long-term purchase agreement separate term for the sale of energy and capacity for these projects.

Doreen M. Harris, President and CEO of NYSERDA, said, “The large-scale solar projects announced today, including five Boralex projects, bring New York State significantly closer to its energy goals. clean energy and its transition to a carbon-free electricity system. NYSERDA looks forward to working with Boralex to ensure that these projects are developed responsibly and with the participation of local stakeholders to allow host communities to benefit from the jobs and essential investments that will result from these solar parks.”

“The support from Boralex and its Beyond Renewable Energies fund will allow us to broaden our reach and our programming, and we look forward to seeing how this partnership develops over the coming years and decades.”

Prior to presenting these projects to NYSERDA, Boralex met with landowners and host community leaders to discuss potential sites and opportunities. Consultations with stakeholders will continue throughout the development, construction and operation of our sites. These projects are also continuously optimised to ensure that they meet the company’s profitability criteria.

Previously, NYSERDA selected Boralex’s Greens Corners, Sandy Creek, Bald Mountain and West River solar projects as part of its 2019 call for tenders. In line with Boralex’s Strategic Plan, in two years, 720 MW of new Boralex projects were selected by NYSERDA as part of its calls for tenders for the production of renewable energy for commercial purposes. In addition, Boralex acquired the 20 MW Sky High solar farm, thereby enhancing the New York State Corporation’s portfolio. With more than 1 GW of projects under development, Boralex remains firmly committed to growing rapidly in this market.