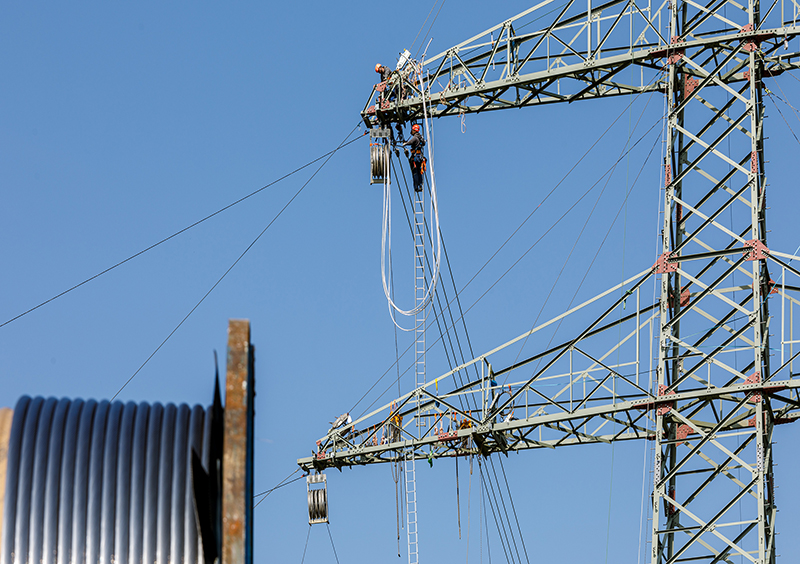 With the approval of the second construction phase of the 380 kV Ostbayernring overhead line, Bavaria’s grid expansion is progressing rapidly. On Friday, July 29, 2022, the government of the Upper Palatinate issued the planning approval for the approximately 43-kilometre section with 114 pylon locations between the Etzenricht and Schwandorf substations. The responsible transmission system operator, TenneT, will now start construction immediately to be able to put the line section into operation in autumn 2024. On many days of the year, more green energy is already being produced in Upper Franconia and the Upper Palatinate than can be consumed there. On the other hand, this energy is lacking at the large industrial sites in Bavaria. At the same time, the Ostbayernring is and remains the supply line from Upper Franconia and the Upper Palatinate. With the replacement building and thus a significantly higher transport capacity, TenneT is therefore ensuring Bavaria’s decentralised and national power supply.

Tim Meyerjürgens, COO of TenneT, says: “The second planning approval decision for the Ostbayernring is a success for the grid expansion and the energy transition in Bavaria. The consequences of the war of aggression against Ukraine show that we must become independent of fossil fuels as quickly as possible in order to maintain our economic locations. If we get our grid expansion projects up and running quickly, we can bring affordable electricity from renewables to consumers. This not only makes us independent of fossil fuels but also makes a sustainable contribution to getting electricity prices under control again. Every single project and every single permit are important building blocks on the way to climate neutrality.”

With the completion of the planning approval process, an intensive planning and approval process ends for TenneT. The focus of the planning was in particular, the early involvement of all those involved. TenneT was able to take numerous planning tips from authorities, municipalities, associations and owners into account before or during the process. Looking back, TenneT is estimated to have offered more than 50 dialogue events in the Etzenricht – Schwandorf planning section.

The planning approval decision can be viewed in the affected municipalities and on the homepage of the Upper Palatinate government from August 5, 2022, under the following link: https://www.regierung.oberpfalz.bayern.de/service/planfeststellung/energieversorgung/planfeststellungsbeschluesse/ostbayernring_abschnitt_a/index.html

TenneT received the building rights for the Etzenricht – Schwandorf line section with the planning approval decision. TenneT and commissioned construction companies will gradually implement the work over the coming months. At the same time, the planning approval decision also stipulates the dismantling of the existing line. After the new Ostbayernring has been implemented, the existing line will be dismantled.

Of course, TenneT will continue to dialogue with the public throughout the construction phase. TenneT has developed a digital information forum so that owners and all residents in the section between Etzenricht and Schwandorf can find out more about the upcoming construction activities. In addition, interested parties can use this platform to inquire about all other topics relating to the new Ostbayernring. The digital information forum can be reached via the following link: https://infomarkt.tennet.eu/ostbayernring

In addition, as in previous years, TenneT regularly provides information via the project website and blog.

The network expansion project is divided into four planning sections. Each section has its own approval process at the responsible district government. Following the planning approval decision for the section between Etzenricht and Schwandorf, two sections of the new Ostbayernring have now been approved. The section between Redwitz and Mechlenreuth was approved by the government of Upper Franconia in November 2021, is currently under construction and is scheduled to go into operation this year. The two planning sections between the Mechlenreuth and Etzenricht substations are still in the planning approval process with the government of Upper Franconia and Upper Palatinate. TenneT is currently preparing its final planning documents based on the comments received. After the optimised planning has been published, there will also be the opportunity to participate in the optimised planning in the official process. TenneT is expected to receive the planning approval decisions for the two sections by the autumn of next year. The entire replacement building should be completed by autumn 2025. The dismantling of the entire existing line should be completed a year later, in autumn 2026.