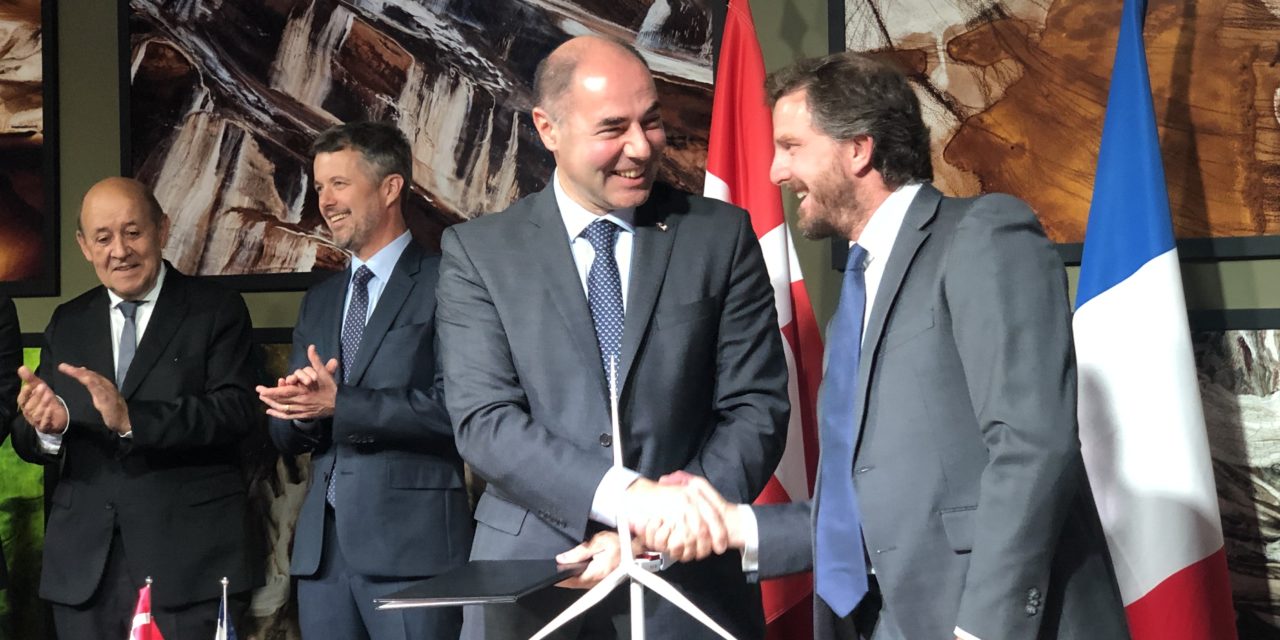 MHI Vestas Offshore Wind has been selected by the Groix & Belle-Ile Floating Offshore Wind Farm company (FEFGBI) to supply offshore wind turbines to the French pre-commercial floating wind farm located in Brittany. The companies signed their final agreement on October 7 in attendance of HRH the Crown Prince of Denmark and Jean-Yves Le Drian, Minister for Europe and Foreign Affairs.

This major milestone was also the opportunity to highlight that establishing (at the start) strong partnerships between developers, financing parties, industrial partners, all levels of state authority and local stakeholders (fishing, environmental body, mayor) reinforces our ability to overcome the project development challenges.

The companies executed the agreement in Paris today in the presence of the Crown Prince and the Crown Princess of Denmark during the opening of their official visit in France spotlighting Danish and French business cooperation focused on energy and the sustainability sector. Foreign Ministers from both countries also took part of the meeting, Jean-Yves Le Drian for France and Jeppe Kofod for Denmark.

MHI Vestas was chosen for its 9.5 MW wind turbine: one of the most powerful turbines currently available on the market. Their latest technical developments allow for higher capacity, while maintaining similar size to those originally planned. The turbines’ higher output per unit, enable the project to reduce the number of offshore wind turbines from four to three.

In addition, the environmental criteria have been heavily assessed in the selection process of the offshore wind turbines because the technical changes made to the pre-commercial farm could not result in an increase in the environmental impact study. Therefore, the decision, was taken to implement the latest floating wind turbine technology, using the V164 platform from MHI Vestas Offshore Wind. “Installing the 9.5 MW machine for the Groix and Belle-Ile project will build on our experience from WindFloat Atlantic in Portugal and Kincardine in Scotland,” said Philippe Kavafyan, CEO of MHI Vestas. “The oceanic conditions we see in the West of France are representative of 80% of global floating potential, so we look forward to delivering our technology to France and leveraging our experience for future floating projects.”

The confirmation of this financing support writes a new chapter in the project’s delivery. In his speech, Yuanzheng Huang, CEO of CGN Europe Energy, the majority shareholder of the FEFGBI project company, said “We at CGN Group feel honoured to form be a part of a project that not only pushes the frontiers of renewables technology but is also testing the French Government’s capacity to promote renewable energy.”

“Entering into this financing agreement with ADEME represents a major milestone for this project and rewards three years of hard work with our partners. Our collaboration with Naval Energies and MHI Vestas also demonstrates that synergy is possible between a Chinese company and European industrial groups.”

“CGN Europe Energy will continue to invest in renewable energies and intends to strengthen its position in the MRE sector. The GBI project is of particular importance to the CGN Group and we will be delighted to see it come to fruition. In short, we want to continue our collaboration with our partners and generate new opportunities in France and in Europe.”

Laurent Schneider-Maunoury, CEO of Naval Energies, seized the opportunity to reiterate how important this project is for the company: “We are especially proud to be contributing to this ground-breaking project via our semi-submersible floating platform, a central component of the technology used. For this pilot farm, we were able to very rapidly upgrade our design to incorporate the MHI Vestas turbines: the most powerful turbines on the floating wind market.  This is a flagship industrial project on both a national and international scale, and we’re delighted to be a part of it, working alongside all the project’s partners!”

Connection work has been subcontracted to RTE and involves installing submarine and underground lines allowing the energy generated by the floating wind farm to be injected into the network. For all the latest project news and developments, and for further details, visit: eoliennes-groix-belle-ile.com