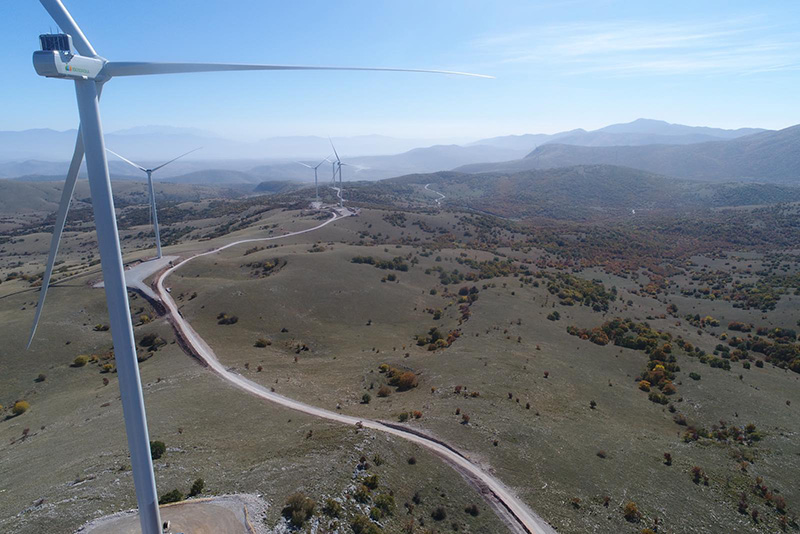 Iberdrola has begun commissioning of Askio III wind farm, located in the town of Galatini, in the region of Western Macedonia, Greece. With an installed capacity of 50 MW, it will supply enough clean, affordable and locally produced energy to meet the annual needs of more than 54,000 homes.

In just over six months, the company has completed the installation of the 12 wind turbines that make up the wind farm, with 70-metre-long blades and a rotor diameter of 150 metres, as well as all the work necessary to connect them to the grid. In total, around 30 kilometres of cable have been laid between the three internal medium-voltage circuits and the evacuation line. In addition, the Lygeri substation near the town of Kozani has been extended.

Although the plant is located in a mountainous area at an altitude of 1,500 metres above sea level and on rocky terrain, the simultaneous execution of civil works, transport and wind turbine assembly, which began in April, has enabled construction to be completed in such a short period of time. In addition, to speed up the commissioning process, all the turbines were tested with the help of generators before being connected to the grid.  Thus, Iberdrola managed to complete the project before the arrival of winter, which would have delayed the evacuation of the facility’s renewable production to the Greek electricity system for months due to the heavy accumulation of snow that is common in these mountains.

During its construction, the project has generated an average of 75 jobs, with peaks of up to 150 jobs, mostly local.

Technology to care for the environment

To minimise the environmental impact, Blade Lifter technology has been used. This method is based on a 10-axle trailer that incorporates an articulated platform to rotate and vertically tilt the blades during transport, making it possible to move it along existing roads and tracks. In this way, it reduces the need to build additional access while reducing environmental impact.

In addition, the turbines are assembled in two stages, which reduces the surface area of each wind turbine platform. By using its own smaller transport crane to assemble the first section of the tower, the need for space for stockpiling the wind turbines is minimised.

This installation will share the grid connection point with the Askio II wind farm, currently under construction, which will reduce its environmental impact and facilitate the commissioning process once the plant is completed.

The Iberdrola group now has a 365 MW clean capacity installed in Greece. In addition to the 38 MW Askio II wind farm, which has already started to receive blades at the site, the company is developing the 18 MW Rokani project near Athens, which is currently under construction.

The Iberdrola group began its commitment to renewable energy more than two decades ago as a fundamental pillar to building its clean, reliable and competitive business model. Thanks to this vision, the company is today a leader in renewable energies, with more than 39,000 MW of renewable capacity installed worldwide. The company has established itself as a global wind energy benchmark, with more than 15,000 wind turbines worldwide.

Iberdrola has just announced a global investment of €17 billion in renewable energy by 2025, 24% of which will be earmarked for European Union countries, excluding Spain. Of the total, more than €4.2 billion will be allocated to onshore wind projects. The group expects to increase its installed renewable capacity by 12,100 MW in the coming years –  3,100 MW of onshore wind – reaching 52,000 MW in 2025.