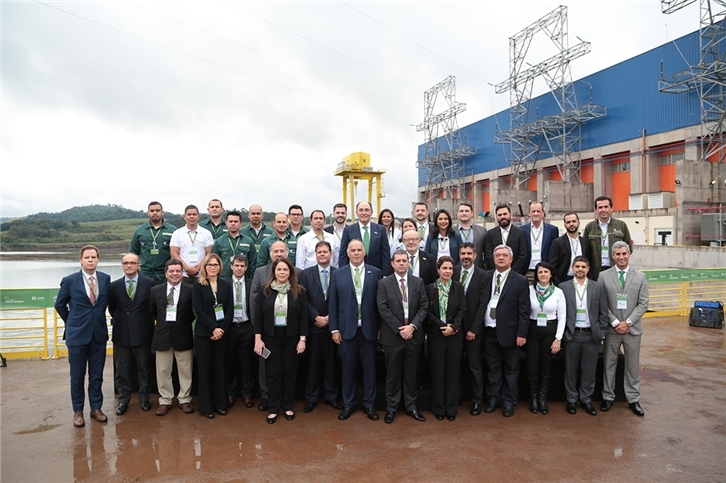 Iberdrola, through its Brazilian affiliate Neoenergia, officially opened the Baixo Iguaçu hydroelectric power plant, a 350-MW facility with an investment of more than €500 million.

The plant will supply sustainable energy to a million Brazilians and its production is equivalent to nearly 8% of the annual electricity demand of the State of Paraná, where the project is located.

During the event, Galán stressed that “we are proud to contribute to the economic and social development of the country” and announced that Iberdrola’s commitment will continue to increase. “Over the next five years alone, we are going to invest around €6.5 billion in new projects in Brazil to continue improving country’s electricity supply and, thus, its competitiveness.”

He also highlighted the social and environmental importance of the Baixo Iguaçu project: “This facility is of benefit to the Iguaçu Falls, as it contributes to maintain the minimum water flows required. In addition, many initiatives have been undertaken in the areas of health, education, infrastructure, public safety and biodiversity in order to preserve and enhance the well-being of the region.”

This new renewable energy infrastructure has been built maintaining the highest standards of quality and respect for the environment, as in the rest of the facilities that the company has. The impact associated to the construction of a power plant of this nature has been minimized as much as possible. Practically, the water channel has not been modified, given that of the 31 km2 of the plant’s reservoir more than 20 km2belong to the river itself. Also, thanks to the use of three Kaplan turbines, one of the most efficient on the market, the necessary flooding area is significantly smaller than that of other hydroelectric plants of similar size.

This hydroelectric plant is yet another example of Iberdrola’s commitment to reducing emissions. As it is a clean and efficient technology, it enables the electrification of the economy while promoting the necessary transformation of the energy sector towards a more sustainable one.

Another important aspect of this power plant is that it will have a decisive impact on the flow of water through the Iguaçu Falls, one of the seven natural wonders of the world, which receives 1.5 million visitors every year.

The waterfalls, whose flow is seriously affected during periods of drought, were diminished to mere trickles in 2006. A report by the National Electric System Operator (ONS) concluded that, thanks to the contribution of this hydroelectric power plant, the famous falls will always have the minimum necessary water flow.

But Baixo Iguaçu is making an even greater contribution to the environment through the Consorcio Empresarial Baixo Iguaçu (CEBI), which has carried out several environmental programmes to monitor, rescue and conserve local species living around the plant. A green corridor for animals has also been built.

Furthermore, in collaboration with the CEBI, agreements have been reached with local municipalities to support health, education, infrastructure and public security programmes. Among the initiatives already completed are the extension of a local school and the building of a new military police station.

While work was underway to obtain the plant’s environmental permit, archaeological findings dating back to almost 6,000 BC were uncovered, most notably a series of cave paintings (150 engravings) hitherto unseen in the area. There are plans to open the site, named the Vista Alta Archaeological Site, to the public, making it one of the few sites that can be visited in the region.

Through Neoenergia, Iberdrola has become one of the top two electricity companies in Brazil by number of customers, with 13.8 million supply points. Trading in 18 states, it produces, transports, distributes and retails electricity in an area spanning 840,000-km2.

The company now has a generation capacity of over 3,700 MW in this country, 86% of which being renewable, from onshore wind farms to hydroelectric power plants. If projects under construction are added in, the capacity reaches nearly 5,000 MW. It also has almost 700,000 kilometres of electric lines operated by the four distribution companies integrated in Neoenergia, namely Cosern, Celpe, Coelba and Elektro.

The commissioning of the Baixo Iguaçu power plant is evidence of Iberdrola’s commitment to hydropower since its foundation more than 170 years ago. It produces 100% renewable energy with zero emissions.

Its historic investment in this technology has given it a leading position in pumped hydro, the most energy efficient storage method in existence, with an installed capacity of 4,400 MW and several projects under construction.

Iberdrola operates the largest pumped storage hydro scheme in Europe, Cortes-La Muela (Valencia) on the river Júcar, with almost 1,400 MW. The company is also working on the ambitious Tâmega project in northern Portugal, a complex that will have more than 1,100 MW of installed power, 890 of which will be pumped. Together, these facilities will convert the Iberian Peninsula into Europe’s battery.