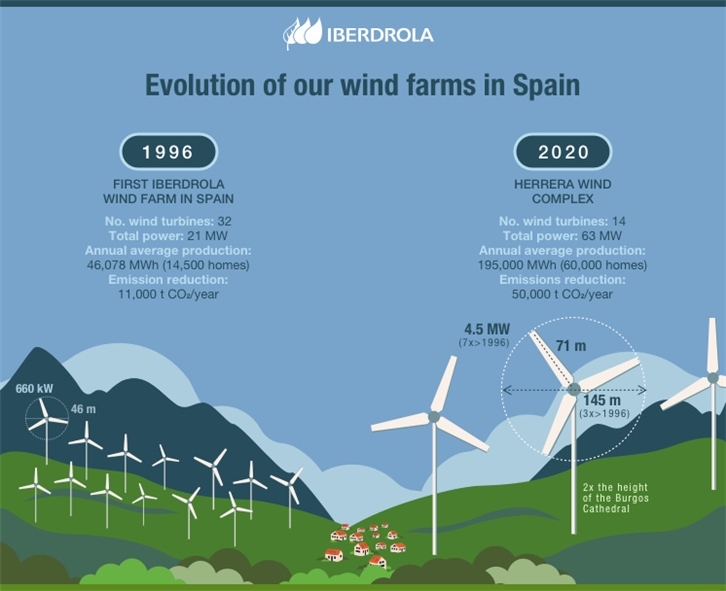 Iberdrola will build its next wind farm in Spain, the Herrera Complex, with the most powerful onshore wind turbine, after awarding Siemens Gamesa the contract to supply the first SG 4.5-145 wind turbines, with a 4.5 MW power unit; which is almost seven times more powerful than the first wind turbines installed in Spain more than two decades ago. The company is, thus, continuing to advance in its commitment to clean energy in Spain, incorporating cutting-edge technologies to provide more competitiveness and sustainability to its renewables projects.

The Herrera Complex, which will be built in Burgos province, is made up of three wind farms – La Huesa, Valdesantos and Orbaneja – and will have an installed capacity of 63 megawatts (MW), distributed between a total of 14 wind turbines. Forecasts indicate that the project will be operational this year.

The Orbaneja and La Huesa wind farms will be located in the municipalities of Isar, Las Quintanillas, Rabé de las Calzadas and Estepar: the first one will consist of seven wind turbines, up to a total of 31.5 MW of installed power, while the second one will have four turbines that will add a further 18 MW. Valdesantos will be built in Estepar and will have three machines with a total installed capacity of 13.5 MW.

Iberdrola will also build the 10 MW-capacity Fuenteblanca wind farm in its vicinity, which will consist of 3 SG 3.4-132 wind turbines, to complete a 73 MW wind farm complex.

The SG 4.5-145 wind turbine, with a new 71-metre blade and a diameter of 145 m, is three times bigger than the first wind turbines and twice the height of Burgos Cathedral.

It also incorporates new technology to maximise energy production and the competitiveness of the installation making it a leading solution for medium-wind sites.

With the Herrera wind complex, Iberdrola is progressing with its renewables investment plan in Spain, where the company plans to install 3,000 new wind and photovoltaic MW. By 2030, company forecasts point to the installation of 10,000 new MW. These actions will enable jobs to be created for 20,000 people.

At present, and with these processes under way, Iberdrola’s projects under construction or in the pipeline – wind and photovoltaic – in Spain total more than 4,000 MW in regions such as Extremadura, Castilla-La Mancha, Castilla y León, Navarra, Aragon, Andalusia, Murcia, Cantabria and Andalusia.

In Spain, Iberdrola is the leader wind developer – with an installed capacity of more than 5,800 MW – and renewable energy leader, with 16,000 MW installed – over 30,300 MW worldwide -, making its generation fleet one of the cleanest in the energy sector.

Iberdrola’s choice of a decarbonised economic model has entailed investments of almost €10 billion euros a year around the world, having allocated almost €100 billion in this area since 2001. Of these, 25 billion have been invested in Spain.

It is also reinforcing its commitment to Castilla y León and its leadership in renewable energies in the region, where it already operates 5,100 MW – of this, 1,500 MW is from wind -, making this the autonomous community with the most ‘green’ megawatts installed by the company.

Along with Herrera, Iberdrola is building the Buniel (Burgos) wind farm complex, in collaboration with Caja Rural de Soria, and the Valdemoro Park, with a total of 164 MW, which makes it one of the largest in Castilla y León. In addition, the BaCa (Ballestas and Casetona) wind farm has just been put into operation with a capacity of 69.3 MW.

Besides this, the company has just started processing the formalities for its first two photovoltaic projects in the area, which will be located in Ciudad Rodrigo (300 MW) and in Villarino (50 MW) in the province of Salamanca. As well as these initiatives, Iberdrola has also secured grid access for a further 500 MW renewable power capacity, consisting of a large wind farm (300 MW) and a 200 MW photovoltaic plant.