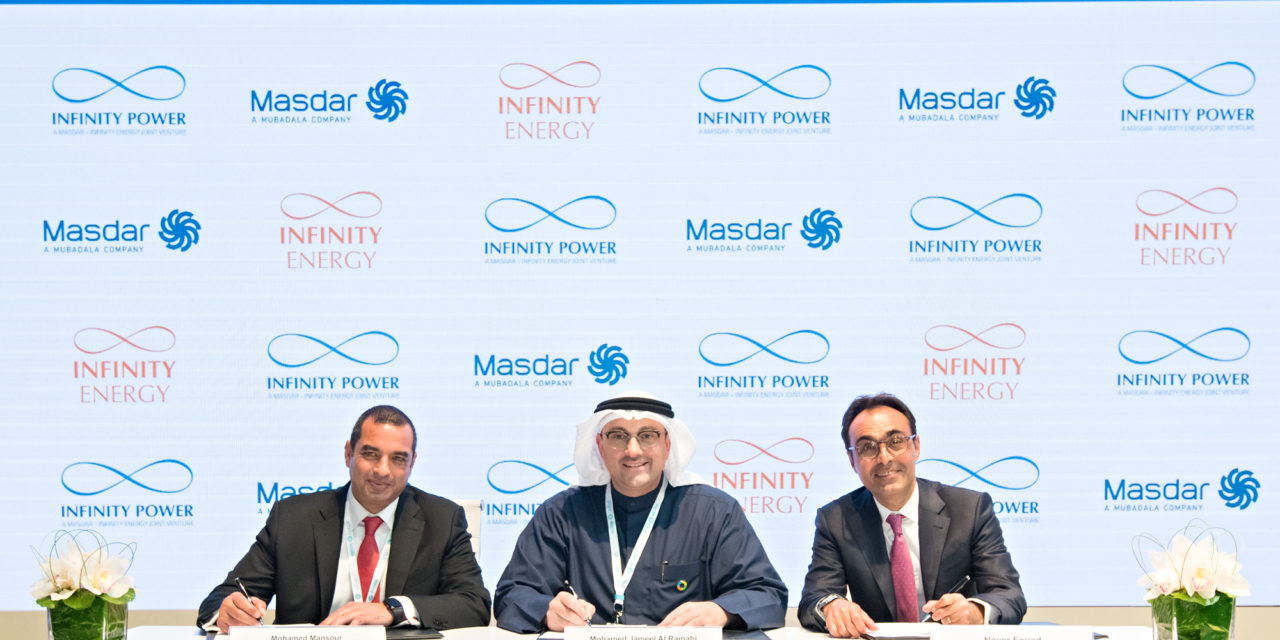 Masdar and Infinity Energy have agreed to establish a joint venture company, Infinity Power, to develop utility-scale and distributed solar energy and wind power projects in Egypt and Africa.

“Egypt has demonstrated its commitment to clean energy with the recent inauguration of the world’s largest solar park at Benban and we are proud to support its government to continue to advance the country’s renewable energy programme,” said Al Ramahi. “The establishment of Infinity Power will bolster the progress Egypt has made in renewable energy and catalyse further development in the region. We look forward to working with Infinity Energy to unlock opportunities to further Egypt’s renewable energy goals and extend energy access to those areas of Africa that are under-powered.”

Infinity Energy is the leading renewable energy developer in Egypt, having completed the development and construction of Egypt’s first large-scale solar power plant in February 2018, followed by another three plants in Benban Solar Park, which is considered the largest solar park in the world to date. Infinity Energy now operates its six solar plants with a total capacity of 235 MWp.

“We are pleased to bring together the experience and resources of Infinity Energy and Masdar to continue our fruitful efforts in the renewable energy sectors in Egypt and Africa, said Mansour of Infinity Energy.

“As Egypt is now envisaged to be a major energy hub in the region, Infinity Power stands at the forefront of developers to bring this vision into reality. Infinity Power will also extend its commitment to our home continent; Africa. We believe in Africa’s large growth potential in the power sector and we look forward to implementing renewable energy generation projects where they are needed, and to seeing the positive impacts of these projects on the local communities where they are located.”

Africa could meet almost a quarter of its energy needs from indigenous and clean renewable energy by 2030, according to IRENA. The development of renewable energy projects under the JV aims to improve energy access, while boosting economic development, creating jobs and improving healthcare services, particularly in the most remote areas. Almost half the continent’s population currently has no access to power.

The European Bank for Reconstruction and Development (EBRD) recently committed an investment in Infinity Energy of up to US$60 million in the form of capital increase in the company to finance the development, construction and operation of renewable energy projects and associated ancillary business including electricity distribution and electric vehicle charging stations in Egypt and across Southern and Eastern Mediterranean (SEMED) countries.

Infinity Energy also established Infinity-e in 2018 to provide charging solutions for electric vehicles. Infinity-e aims to have more than 100 charging stations operational by the end of 2020, of which 15 stations are already operational and cover all main highways and roads in Egypt.

Furthermore, Infinity Energy is a major shareholder in E-Power, a licensed distribution and selling electricity company, which was established in 2014. E-Power provides a variety of services including network maintenance, value-based engineering for electrical network and facility management. E-Power has secured over 15 contracts with the leading real-estate developers in the Egyptian market.