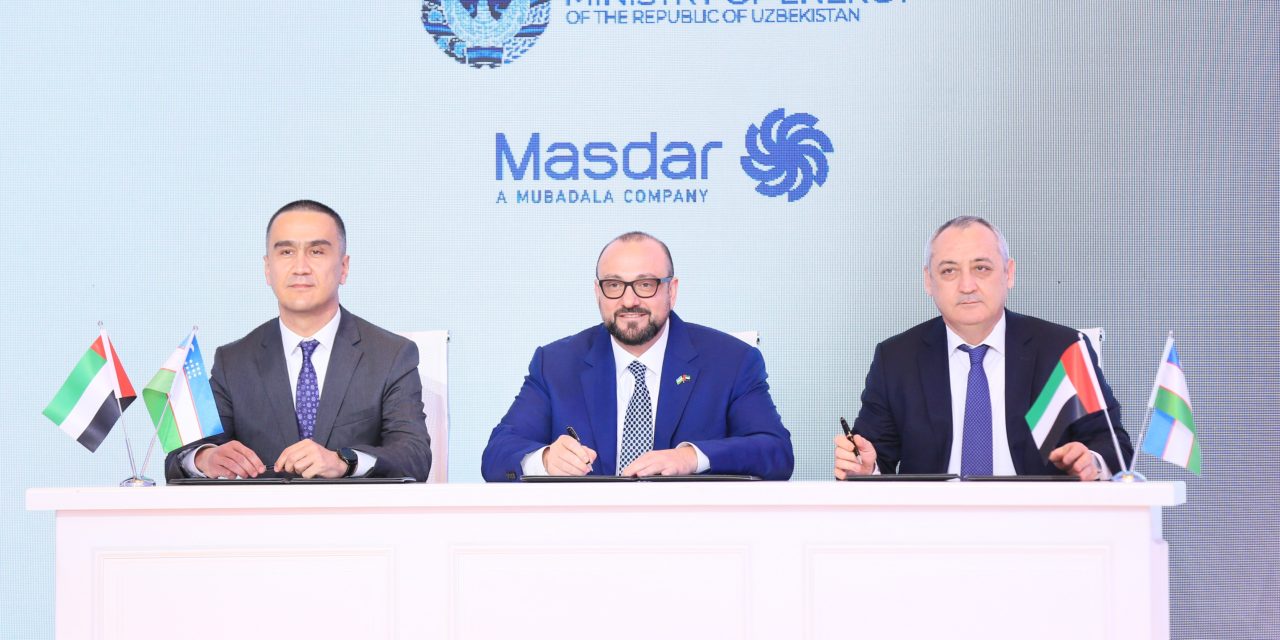 Masdar has signed an Implementation Agreement with the Government of the Republic of Uzbekistan to extend the capacity of its utility-scale wind farm project – the first such project in Uzbekistan – to up to 1.5 gigawatts (GW).

The agreement was signed in the presence of H.E. Sardor Umurzakov, Deputy Prime Minister and Minister of Investments and Foreign Trade for the Republic of Uzbekistan, H.E. Alisher Sultanov, Minister of Energy for the Republic of Uzbekistan, and H.E. Saeed Matar Al-Qemzi, UAE Ambassador to Uzbekistan, during an event in Tashkent to celebrate the groundbreaking on the project, with H.E. Dr. Sultan Ahmed Al Jaber, UAE Special Envoy for Climate Change, Minister of Industry and Advanced Technology, and Chairman of Masdar, and H.E. Suhail Al Mazrouei, Minister of Energy and Infrastructure for the UAE, attending virtually. H.E. Shukhrat Vafaev, Deputy Minister, Ministry of Investments and Foreign Trade, and H.E. Sherzod Khodjaev, Deputy Minister of Energy, signed the project capacity extension agreement with Mohamed Jameel Al Ramahi, Chief Executive Officer of Masdar.

H.E. Sardor Umurzakov, Deputy Prime Minister and Minister of Investments and Foreign Trade for the Republic of Uzbekistan, said, “Mobilisation of renewable energy potential in Uzbekistan would provide a significant contribution to sustainable economic growth and fighting climate change. Along with that, the expansion of clean power generation capacities by Masdar will support our objective to double the volume of electricity generation by 2030. Masdar will become a strong bridge connecting our countries, through which new Emirati companies will also invest in Uzbekistan.”

H.E. Dr. Sultan Ahmed Al Jaber, UAE Special Envoy for Climate Change and Minister of Industry and Advanced Technology, said, “For the UAE it is important that our actions on climate can help amplify the efforts of others around the world. This partnership is a clear example of how we are putting that tenet into practice. Together, we have an unprecedented opportunity to leverage our collective climate action to enhance sustainable growth in Uzbekistan, while making real progress on global climate goals.”

H.E. Alisher Sultanov, Minister of Energy for the Republic of Uzbekistan, said, “We value our partnership with Masdar and welcome this expansion, which will be the largest facility of its kind in our region. This is a vitally important project for Uzbekistan, helping us build towards our target of 25 percent of electricity generated by renewables by 2030.”

H.E. Suhail Al Mazrouei, the UAE Minister of Energy and Infrastructure, said, “Today’s landmark agreement will enhance co-operation between the Republic of Uzbekistan and the United Arab Emirates in the field of renewable energy. As signatories to the Paris Agreement, Uzbekistan and the UAE are committed to driving collective action on climate. We look forward to strengthening our relationship with Uzbekistan further by developing more clean energy projects with them in future.”

Mohamed Jameel Al Ramahi, Chief Executive Officer of Masdar, said, “Today’s event highlights the significant progress we have made, not only on this project but in helping the Government of the Republic of Uzbekistan to achieve its clean energy and climate change objectives. As a global leader in the development of utility-scale wind power, Masdar is proud to support Uzbekistan’s low-carbon energy strategy, and to strengthen our partnership with the Government to drive sustainable development.”

Masdar entered into bilateral agreements with the Government of Uzbekistan last year to develop, build and operate the 500-megawatt (MW) wind farm project, its second utility-scale clean energy project in the country, and the largest wind farm in Central Asia. The project will attract foreign direct investment of more than US$600 million.

Extending the capacity of the project, located in the Zarafshan district of the Navoi region, to as much as 1.5 GW will further help Uzbekistan achieve its objectives of adding up to 3 GW of wind energy and meeting 25 percent of its electricity needs from renewable sources by the end of the decade.

The 500 MW Zarafshan wind farm is expected to begin commercial operation by the end of 2024. At a capacity of 500 MW, the project would provide enough electricity to power 500,000 homes, while displacing 1.1 million tons of carbon dioxide per year.

Masdar signed the Power Purchase Agreement (PPA) and Investment Agreement for the Zarafshan wind farm with the Ministry of Investments and Foreign Trade of the Republic of Uzbekistan and JSC National Electric Grid of Uzbekistan in June last year.

Last December, Masdar announced a financial close on the 100 MW Nur Navoi Solar Project – Uzbekistan’s first successfully-financed independent power producer (IPP) solar project. Masdar signed a PPA and Government Support Agreement with the Government of the Republic of Uzbekistan in November 2019 to design, finance, build and operate the solar plant. Masdar was announced as the winning bidder for the solar project after tendering the lowest tariff of 2.679 US cents per kilowatt-hour in a competitive auction.

In March 2019, the President of the Republic of Uzbekistan, H.E. Shavkat Mirziyoyev, attended the exchange of agreements, focused on the energy sector, between the Republic of Uzbekistan and Mubadala Investment Company. Official documents were also exchanged pertaining to agreements between Masdar, JSC Uzbekenergo and the Ministry of Investments and Foreign Trade to pursue renewable energy projects in Uzbekistan.