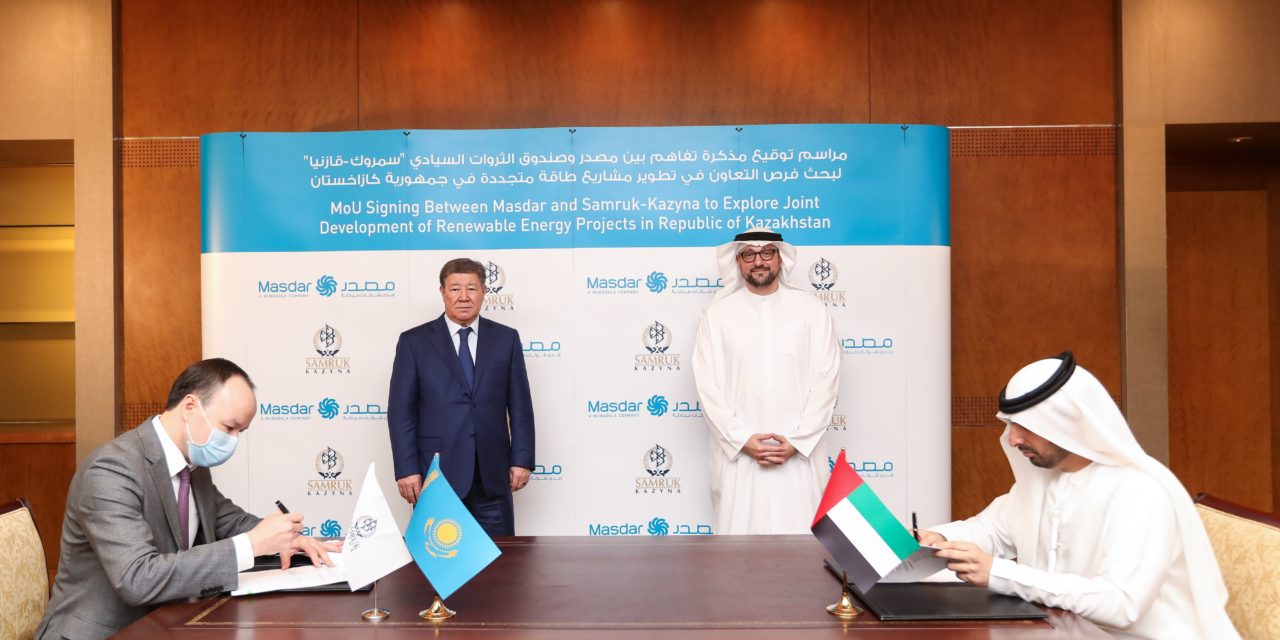 Masdar, one of the world’s leading renewable energy companies and a subsidiary of Mubadala Investment Company, and Samruk-Kazyna, the sovereign wealth fund of the Republic of Kazakhstan, have signed a strategic agreement to explore renewable energy opportunities in Kazakhstan and support the country’s clean-energy objectives.

The two companies signed a Memorandum of Understanding (MoU) to explore the joint development of renewable energy projects, and the potential establishment of a joint venture. Fawaz Al Muharrami, Acting Executive Director, Masdar Clean Energy, and Yerzhan Tutkushev, Managing Director for logistics and international cooperation, Member of Management Board of Samruk-Kazyna, signed the agreement today at a ceremony held at Emirates Palace Hotel in Abu Dhabi in the presence of Mohamed Jameel Al Ramahi, Chief Executive Officer of Masdar, and Akhmetzhan Yessimov, CEO of Samruk-Kazyna.

“As a global leader in renewable energy projects, active in more than 30 countries, Masdar is well-positioned to help the Republic of Kazakhstan achieve its clean energy objectives,” said Mohamed Jameel Al Ramahi, CEO of Masdar. “We look forward to collaborating with Samruk-Kazyna on developing of renewable energy projects in the country. We also welcome the opportunity to extend our presence in Central Asia, which we see as an area of strategic importance for us.”

“Samruk-Kazyna JSC is going through the process of transformation into an investment holding. We are striving towards Mubadala’s operational model. This also applies to international investments,” said Akhmetzhan Yessimov, CEO of Samruk-Kazyna.

Samruk-Kazyna has a portfolio of enterprises across industries, including companies in the electric power generation and distribution sectors. The government of Kazakhstan has committed to increasing the share of renewable energy in domestic electricity generation to 10 percent by 2030 and 50 percent by 2050.

Last December, Masdar announced the financial close of the 100-megawatt Nur Navoi Solar Project – Uzbekistan’s first successfully financed independent power producer solar project.  Masdar also signed an agreement last year with the government in Uzbekistan to design, finance, build and operate a 500MW utility-scale wind farm project, to be located in the Zarafshon district of the Navoi Region. Commercial operation is expected to begin at the end of 2024.