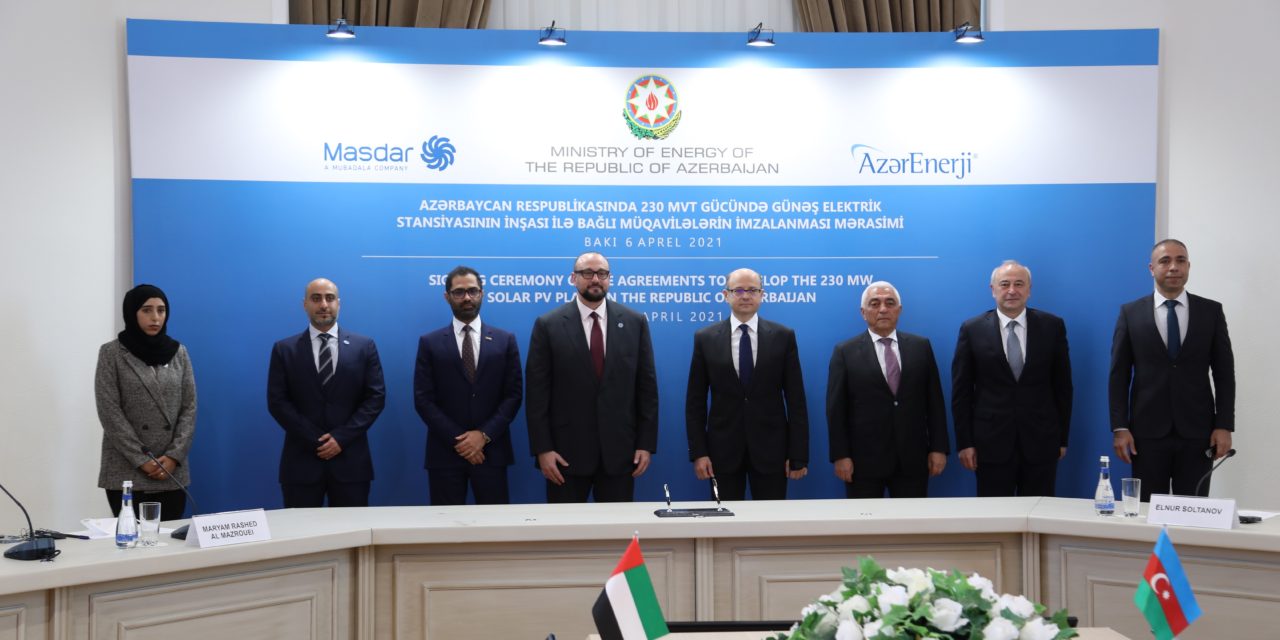 Masdar has signed agreements to develop a utility-scale solar photovoltaic project in the Republic of Azerbaijan. The 230-megawatt (MWac) project is the country’s first foreign investment-based independent solar project structured as a public-private partnership.

Mohamed Jameel Al Ramahi, Chief Executive Officer of Masdar, signed the Investment Agreement for the project with H.E Parviz Shahbazov, Minister of Energy of the Republic of Azerbaijan, and he signed a Power Purchase Agreement and Transmission Connection Agreement with Baba Rzayev, President of “Azerenerji” OJSC, the national electrical power company and off-taker for the project. The signings took place during a ceremony yesterday at the Ministry of Energy Office in Baku, with H.E. Dr. Sultan Ahmed Al Jaber, UAE Special Envoy for Climate Change, Minister of Industry and Advanced Technology, and Chairman of Masdar, and H.E. Suhail Al Mazrouei, Minister of Energy and Infrastructure for the UAE, attending virtually. Abdalla Alshamsi, Charge D’Affairs at the UAE Embassy in Baku, also attended.

H.E Parviz Shahbazov, Minister of Energy of the Republic of Azerbaijan, appreciated this project based on foreign investment in terms of addressing the global challenges, sustainable and diversified development of the country’s economy, as well as the objectives of the reforms in the energy sector. He said, “The transformation of Azerbaijan into a country of “green growth” through the extensive use of renewable energy sources over the next 10 years has been defined by H.E Ilham Aliyev, the President of the Republic of Azerbaijan as one of the national priorities that will ensure socio-economic development. By signing these contracts for a solar power plant worth about US$200 million, we are one step closer to our goals for renewable energy and carbon emissions. The solar power plant to be built in Baku and Absheron district will produce about 500 million kWh of electricity annually, save 110 million cubic meters of natural gas, reduce carbon emissions by 200,000 tons, create new jobs and attract other investors to new projects.”

H.E. Dr. Sultan Ahmed Al Jaber, UAE Special Envoy for Climate Change and Minister of Industry and Advanced Technology, said, “For the UAE, it is important that our actions on climate always amplify the efforts of others around the world. This partnership with Azerbaijan is a great opportunity to leverage our collective wills on this key issue to work towards meeting global climate goals, reducing environmental impacts and creating new knowledge, skills and jobs.”

H.E. Suhail Al Mazrouei, the UAE Minister of Energy and Infrastructure, said, “Today’s landmark agreements will enhance co-operation between the Republic of Azerbaijan and the United Arab Emirates in the renewable energy sector. Azerbaijan and the UAE, both signatories to the Paris Agreement, are united in our commitment to combating climate change. We look forward to working with Azerbaijan on other clean energy opportunities in future.”

Baba Rzayev, President of Azerenerji OJSC underlined the importance of wind and solar energy pilot projects in the course of diversifying the energy production of Azerbaijan, which has become an exporter of electricity along with ensuring its energy security, through renewable energy sources. “According to the signed agreements, the connection of the 230 MW power plant to be built by the company to the network and the purchase of electricity generated at the plant will be performed by Azerenerji OJSC,” he said. “The power plant will be integrated into the energy system by connecting to the “Janub” substation. Together we will achieve timely and high-level implementation of these agreements.”

Mohamed Jameel Al Ramahi, Chief Executive Officer of Masdar, said, “This project marks a significant stage in Azerbaijan’s clean energy transition. Masdar has taken an active role in addressing climate change since 2006 and today we are a catalyst for renewable energy in more than 30 countries around the world. We are honoured to be working with the Government of the Republic of Azerbaijan on this landmark project, which will help Azerbaijan diversify its energy sources, drive sustainable development and reduce emissions. ”

The project entails developing, financing, constructing, and operating the 230 MWac PV plant, to be located nine kilometers northwest of the Alat settlement in the Republic of Azerbaijan. Masdar signed the implementation agreement for the project in January last year. The plant is expected to start commercial operation in early 2023.

Azerbaijan is targeting to increase its installed power capacity to 30 percent from renewable sources by 2030, as the country looks to diversify its economy and reduce greenhouse gas emissions. Azerbaijan has an estimated solar energy potential of 23,040 MW, according to the International Renewable Energy Agency (IRENA). The project will help to generate half a billion kilowatt-hours of electricity annually, enough to meet the needs of more than 110,000 homes, and will reduce emissions by 200,000 tons a year.