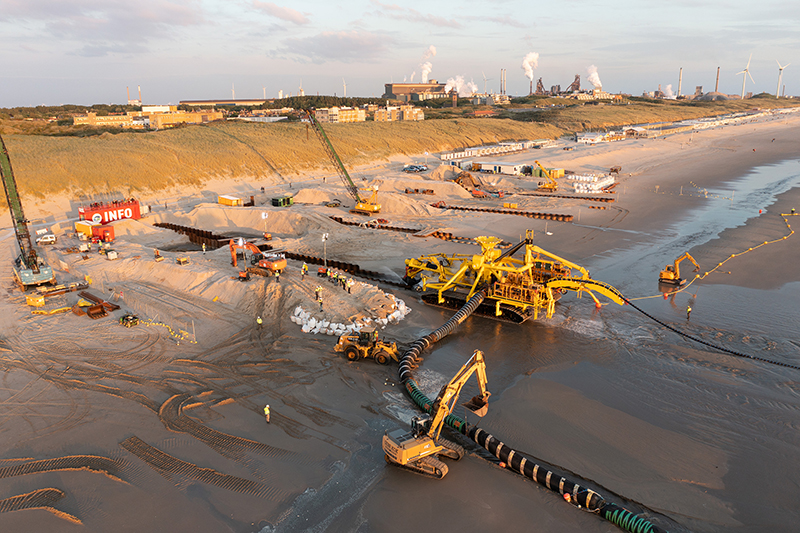 Meanwhile, all four sea cables have been pulled in under the dunes by contractor Jan de Nul. The first two cables for Hollandse Kust (noord) are already up to the socket at a safe depth in the seabed. Once the Moonfish returns to work, it will first bury cable number four, intended for Hollandse Kust (west Alpha), in the beach and seabed. This will be followed by the remainder of cable number three, which has already been partially buried.

In anticipation of the digging work, the necessary preparations have already been made offshore. On the fourth sea cable route, there is a large and rigid sand package off the coast that makes the Moonfish excavation work difficult. Jan de Nul solved this by driving in sheet piling plates, which loosened the sand a little. The sheets were removed again immediately after being driven in. Preparatory excavation work is also being carried out on the beach this weekend.

When the weather and the tide are good (no waves bigger than 1 metre), the cable will be loaded into the Moonfish, and the vehicle will be coupled to the floating water pipe. The floating water pipe will pump water to the powerful water jets on the Moonfish’s long sword. With these, it makes an eight-metre-deep trench in the seabed into which it immediately lays the cable. The trench is then immediately closed.

Once the cable is at depth in the Heemskerk beach, the receiving pit is removed and refilled with sand. The Moonfish then buries the cable to a distance of three kilometres off the coast. There, the subsea vehicle UTV1200 takes over the job until it reaches the ‘socket at sea’. This TenneT substation is located 50 kilometres off the coast of Egmond aan Zee. The cable is less deep on this part of the route, at about 2.5 – 3 metres.

The Moonfish is again sailed to the coast on a ship for the third cable. It then travels the last kilometre to the beach independently over the seabed. Then the loading and coupling process repeats itself, allowing the robotic vehicle to bury another part of sea cable three until the UTV1200 takes over the job there too.

Interested in following the project closely? Then download the TenneT BouwApp (in Dutch) free of charge from the App Store (iOS) or Google Play (Android). This way, you will continuously receive up-to-date information about the work to connect the offshore wind farms. Would you like to follow the Moonfish works live? Then come to our Info Point next to the work site early next week for a perfect view of this special operation.