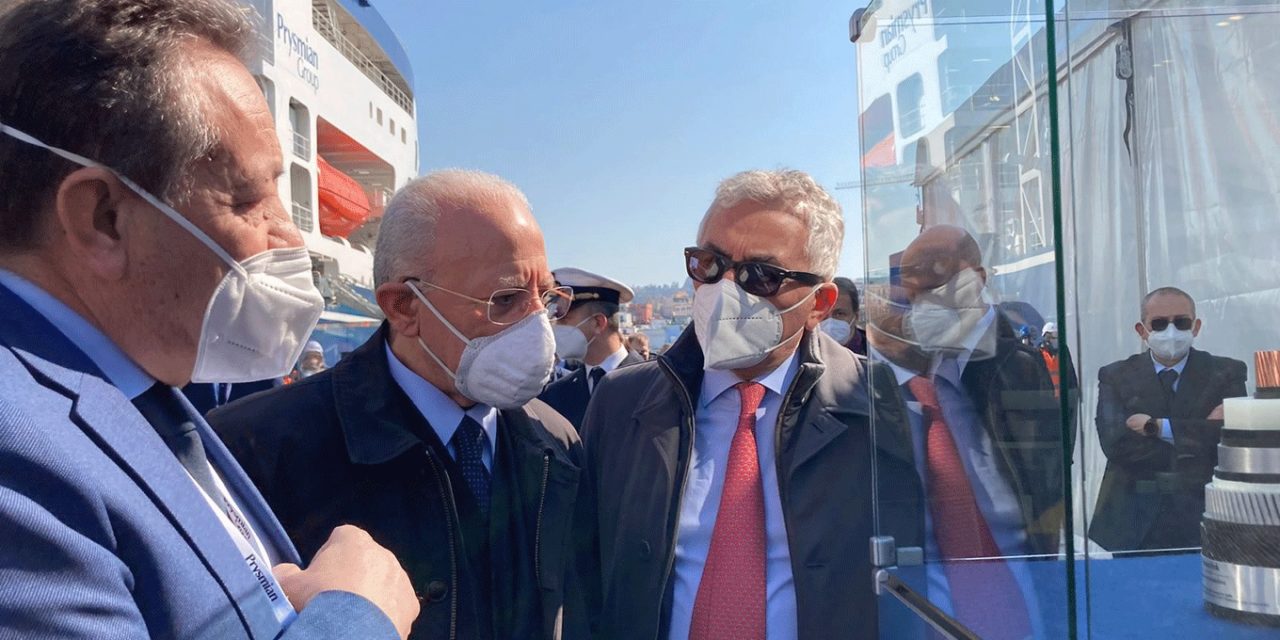 Prysmian Group is keeping pace with executing its investment plan of about €1 billion by 2024, mainly targeted at developing businesses that support the energy transition.

“Development of the trans-European power grid plays a strategic role in decarbonisation and in the transition to renewable sources, as well as in improving EU energy autonomy — an urgent need that has returned to the fore with the Russia-Ukraine conflict. As a global leader in the cable industry, we have decided to increase investments chiefly in support of energy interconnection projects and connections for renewable sources,” comments Valerio Battista, Prysmian Group’s CEO, on the occasion of the Submarine Cable Day for the presentation of the new cable-laying vessel Leonardo da Vinci, held in Naples, in presence of the major international utilities and grid operators.

This is a major investment plan aimed to consolidate our approximately 35-40% share in the high voltage submarine and underground cable market set to grow up to over €8 billion a year in terms of projects awarded (2025 forecasts). In 2021 Prysmian acquired projects worth €4.8 billion. In addition, in early 2022, the Group was awarded the contract to build Neu Connect, the first power interconnection between Great Britain and Germany, a milestone project within the construction of the pan-European power grid.

The Leonardo da Vinci is a technological gem built by Vard Group (Fincantieri). It is the world’s largest cable-laying vessel, requiring an investment of over €170 million (already funded before the launch of the 2022-2024 plan), which will allow to expedite the time needed to complete submarine interconnection projects, while also decreasing their environmental impact. The Group’s fleet of cable-laying vessels also includes the Giulio Verne, the Cable Entreprise and the Ulisse, in addition to the new barge Barbarossa. Moreover, in addition to the Arco Felice (Naples) base, it can also count on the Middlesbrough operating base in Great Britain.

Significant investments will be made in expanding the production capacity and technological equipment of the key excellence centres for power transmission submarine cables. An investment of over €80 million will go to the Arco Felice (Naples) plant, which will be expanded, including in view of the execution of the Tyrrhenian Link interconnection. An investment of over €100 million will go to Pikkala (Finland) centre of excellence for Northern Europe, particularly focused on offshore wind farm cabling projects, as well as to the Gron plant in France for the production of the German HVDC cable projects. The current submarine cable production structure is rounded out by the plants in Nordenham, Germany, and Drammen, Norway.

The Group is also accelerating its plan to build the first high-voltage submarine cable facility in Massachusetts, USA, which with an investment of approximately €200 million will be a hub of strategic importance for the development of the offshore wind power industry in the country.

“As we showed just a few days ago, with the early completion of the NSL interconnector between the UK and Norway, the world’s longest, we can assure unique levels of reliability and precision in executing projects in our sector,” commented Hakan Ozmen, EVP Project Business Prysmian Group.

When it comes to technological innovation, the Group is on the cutting edge with its 525 kV P-Laser cable system, offering a performance unparalleled worldwide for efficiency in energy transmission and an innovative aramid-armoured cable for submarine depths of up to 3,000 metres. Considerable innovation has also been shown in the development of digital devices for power grid monitoring, an area in which Prysmian is on the cutting edge with the PRY-CAM technology. Following the integration of the acquired Omnisens with Prysmian Electronics, the Group created the new EOSS Division with the objective of further developing this promising niche market.