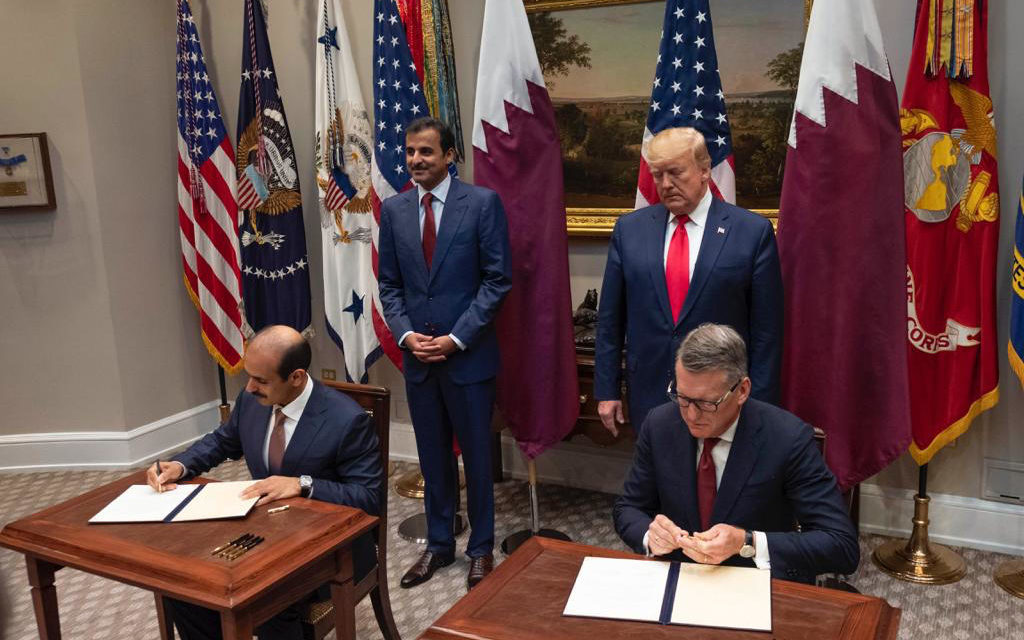 Qatar Petroleum has signed an agreement with Chevron Phillips Chemical Company LLC to develop a new world-scale petrochemical project in the Gulf Coast region of the United States of America.

The signing took place at the White House, in the presence of His Highness Sheikh Tamim bin Hamad Al Thani, the Amir of the State of Qatar, and the President of the United States, Donald Trump. The agreement was signed by His Excellency Saad Sherida Al-Kaabi, the Minister of State for Energy Affairs, the President and CEO of Qatar Petroleum, and by Mark E. Lashier, President & CEO of Chevron Phillips Chemical.

With an estimated cost of around $8 billion, the U.S. Gulf Coast II Petrochemical Project (USGC II) will include an ethylene cracker with a capacity of 2 million tons per annum making it the largest cracker in the world, and two high-density polyethylene units with a capacity of one million tons per annum each. The complex will be located in the U.S. Gulf Coast region, where there is direct access to significant ethane quantities produced by U.S. shale basins, including the prolific Permian Basin.

Pursuant to the agreement, Qatar Petroleum will own a 49% share in the USGC II project, while Chevron Phillips Chemical will own the remaining 51% share and provide project management and oversight and be responsible for the operation and management of the facility.

His Excellency Mr. Saad Sherida Al-Kaabi welcomed the signing of the agreement and said “This is the second agreement of its kind in as many weeks, with our trusted partner, Chevron Phillips Chemical, to further cement the strong partnership between our two companies and to complement Qatar Petroleum’s international portfolio in the United States, which is a core growth area for us as we believe it has great prospects and growth opportunities.”

“This important project will help meet increasing global demand for petrochemicals market. It also showcases the momentum of Qatar Petroleum’s international growth strategy, which has taken robust steps in various upstream and downstream activities in many parts of the world,” Minister Al-Kaabi concluded.

On his part, Mr. Mark Lashier, the president and CEO of Chevron Phillips Chemical said “Qatar Petroleum is already a terrific partner of Chevron Phillips Chemical on petrochemical ventures in Qatar and we look forward to expanding our relationship in the United States as we jointly seek to develop a new petrochemical facility along the U.S. Gulf Coast. Qatar Petroleum’s financial strength, its commitment to safety as a core value and shared belief in our strategy to build facilities located close to competitive feedstocks makes this an ideal relationship.”

The award of engineering, procurement and construction (EPC) contracts for the USGC II project is currently planned for 2021 with targeted startup of the new facility in 2024.

In June 2019, Qatar Petroleum announced a joint venture with Chevron Phillips Chemical to pursue a world-scale petrochemical plant in Qatar at the Ras Laffan Industrial City with a nameplate capacity of 1.9 million tons of ethylene per annum, making it the largest ethane cracker in the Middle East and one of the largest in the world.