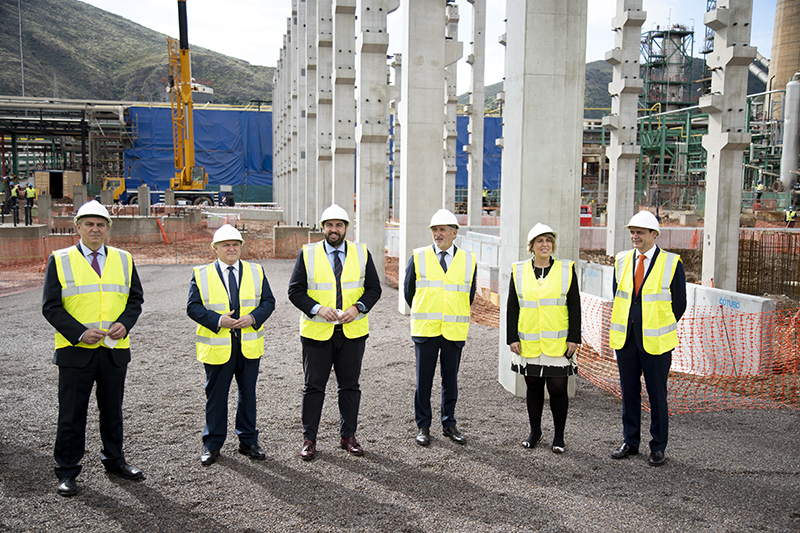 Repsol’s Chairman, Antonio Brufau, has attended the presentation of the beginning of the construction works of the first advanced biofuels plant in Spain at the company’s Cartagena refinery. At the event, he was accompanied by the Director of the industrial complex, Antonio Mestre, and by the President of the Autonomous Community of the Region of Murcia, Fernando López Miras, the Delegate of the national Government in the Region of Murcia, José Vélez, the Mayoress of Cartagena, Noelia Arroyo, and other representatives of the regional and local authorities and business entities. After learning about the details of the project, they went inside the refinery to visit the area where the hydrotreatment plant will be installed.

Repsol, in alignment with its ambition to become a net-zero emissions company by 2050, will invest €200 million in this project that will enable the supply of 250,000 tons per year of advanced biofuels, such as biodiesel, biojet, bionaphtha, and biopropane to be used in planes, trucks or cars without the need for modifications of the existing engines. These eco-fuels will be produced from residues and their use will help reduce 900,000 tons of CO2 per year.

The Chairman of Repsol assured that “with this project, Cartagena is going to consolidate itself as a supply center of fundamental products for the present and for the future, and an example of Repsol’s commitment to sustainable mobility.” Antonio Brufau stressed the importance of committing to technological neutrality to be able to advance towards the goal of achieving zero net emissions by 2050. He called on public administrations to create “an enabling, facilitating, flexible, and non-exclusive regulation” that will permit the development of future projects, since only in this way ” will we be protecting our economy, industry, and employment”.

For his part, the President of the Regional Government, Fernando López Miras, said that “Repsol represents a commitment to progress, development, and sustainability. Cartagena and Repsol have grown hand in hand, to a degree that it is not possible to understand the development of Escombreras and its conversion into a global energy hub without Repsol. And now, we the add good news of the construction of the first advanced biofuels plant in Spain, a cutting-edge plant that is a magnificent example of the so-called circular economy.”

The Delegate of the national Government in the Region of Murcia, José Vélez, pointed out that “with the construction of this first advanced biofuels plant, Repsol will once again be one of the major companies in the region, channelling quality employment and powerful investments, placing the region at the forefront of technological development.”

The Mayoress of Cartagena, Noelia Arroyo, considers that “what begins today is another great industrial commitment of Repsol in Cartagena, for the investment it represents, for the employment it generates, and for the activity it will bring to the Escombreras Valley.” In addition, she emphasised that “it exemplifies the industrial application of the most avant-garde research in the generation of fuels through recycling.”

Regarding the project, the Director of the refinery of Repsol in Cartagena, Antonio Mestre, highlighted that the new plant “is a tangible example of circular economy that will allow us to offer sustainable mobility solutions to all sectors of society, and it is a very important step in the transformation of the industrial complex as a multi-energy hub.”

Circular economy, a strategic pillar for the decarbonisation of transport

Repsol has been incorporating biofuels into its automotive fuels for more than two decades. Now the company is taking one step more and, using the circular economy as a tool, will be producing advanced biofuels from different types of waste from the agri-food industry and others, such as used cooking oils. In this way, Repsol will give a second life to waste that would otherwise end up in a landfill by transforming it into products with a high added value.

These advanced biofuels are a sustainable solution for all segments of mobility, especially for those that have no other alternative to decarbonise their activity, such as maritime, long-distance or aviation transport. They can reduce net CO2 emissions by 65% to 85% compared to the traditional fuels they replace.

Repsol relies on the circular economy, as one of its strategic pillars, to manufacture products with low, zero, or even a negative carbon footprint. Repsol’s goal is to use three million tons of waste per year to produce two million tons of low-carbon fuels by 2030, which will mitigate more than seven million tons of CO2 per year.

Progress in the construction works

The project is being developed in four different areas covering a surface area of 41,500 m2. Three of these will be located inside the refinery and correspond to the hydrotreating unit, the hydrogen production unit, and the biofuel storage tank area. The fourth area will be located in the facilities of the Port Authority of Cartagena where Repsol operates. This area will be equipped with the necessary infrastructures for the storage of 300,000 tons of different types of waste that will arrive by sea and the subsequent supply to domestic or export markets.

After the previous work of dismantling the disused facilities inside the refinery to house the new units – including the removal of 53,000 m3 of land – work is currently focused on civil works. Specifically, work has already begun on the construction of the tanks that will store the advanced biofuels. In the areas where the hydrotreatment and hydrogen plants will be located, civil works related to the installation of concrete structures and the placement of racks for the pipelines through which the raw materials and the advanced biofuels will be transported are already underway.

240 auxiliary companies and 1,000 people will be involved in the construction works

The expansion of the facilities at the Cartagena refinery to allow the building of the new advanced biofuels plant, equipped with state-of-the-art technology, will generate around 1,000 jobs in the different phases of the project and the involvement of 240 auxiliary companies, of which 21% will be local, 25% regional, 42% national, and 12% international.

At present, more than 25 contracting companies and approximately 300 people are already working inside the refinery. This figure will increase to an average of 600 employees, and the peak is expected to be reached next autumn with some 800 direct and indirect workers.

Since the project was launched, Repsol has spent more than €72 million on the preliminary engineering work, commissioning of equipment, and auxiliary company labour.

The Cartagena refinery, a benchmark in Europe

The Cartagena refinery is one of the main economic engines and generators of employment in the Region of Murcia. Nearly 900 highly qualified people work in the industrial complex in highly specialised positions. In addition to direct employment, the refinery generates around 400 jobs through contractors on a recurring basis, with this figure rising to 2,000 for specific projects.

Repsol has invested more than €456 million in the Cartagena industrial complex in the last ten years. To this amount, must be added the project to expand the refinery, inaugurated in 2012 by His Majesty King Felipe VI, then Crown Prince, which represented the largest industrial investment made in Spain, worth €3.2 billion and placing the industrial complex at the technological forefront in its sector. Today, the Cartagena refinery is an industrial benchmark, and it is among the most efficient facilities in Europe.

The Cartagena industrial facility is currently facing a transformation that will involve the evolution of its processes to become a multi-energy hub capable of producing a multitude of products with a low, zero, or even a negative carbon footprint. To do this, Repsol will apply all available technologies, such as renewable hydrogen, circular economy, and CO2 capture and use, and it will rely on additional tools, including digitisation and energy efficiency. In 2021 alone, during maintenance work on the lubricant units and the last scheduled shutdown carried out in the conversion and hydrotreating areas, Repsol invested €31 million in projects to improve the energy efficiency of its facilities in Cartagena.

Repsol, stepping up the energy transition

The EU institutions have already outlined a roadmap through a new directive that establishes that, in the transport sector, the share of renewable energies in final energy consumption must be at least 14% by 2030. Of that percentage, by that year at least 3.5% must be advanced biofuels. In addition, in July 2021, the European Commission published a new legislative package that proposes to increase the level of ambition of CO2 reductions in 2030 and align it with the goal of achieving climate neutrality in 2050. This package, called Fit for 55 because it promotes the reduction of CO2 emissions in the European economy to reach 55% by 2030, focuses on the need to increase the speed of decarbonisation of the transport sector. Among other measures, it includes the Re-fuelEU Aviation initiative, which aims to boost the supply of and demand for sustainable aviation fuels in the European Union ̶including biofuels and advanced biofuels ̶ reaching use of 2% in 2025, 5% in 2030, and 63% in 2050.

For its part, the Spanish National Integrated Energy and Climate Plan (PNIEC) sets an even more demanding target of 28% renewable energy in transportation by 2030. The PNIEC recognises that biofuels are the most widely available and currently used renewable technology in transportation, especially in sectors such as heavy vehicles, aviation, and maritime, where electrification is currently not possible. In addition, the Climate Change and Energy Transition Law, approved by the Spanish Congress in May 2021, contains an article dedicated to sustainable alternative fuels in transportation, with special emphasis on advanced biofuels and other fuels of non-biological origin.

Repsol is fully aligned with the initiatives and supports the achievement of these objectives with the construction of the first advanced biofuels plant in Spain and with various other projects that it has underway. Specifically, the multi-energy company has processed frying oil for the first time at its refinery in A Coruña to make biodiesel, and at its refineries in Puertollano, Tarragona, and Bilbao, it has produced batches of biojet that have enabled the first flights to be made with biofuel produced in Spain from waste, together with Iberia and Vueling. In this way, Repsol is anticipating the regulatory framework and making decisive progress in its goal of becoming a carbon-neutral company and offering sustainable fuels to sectors that are difficult to decarbonise, such as aviation, long-distance transport, and maritime transport.