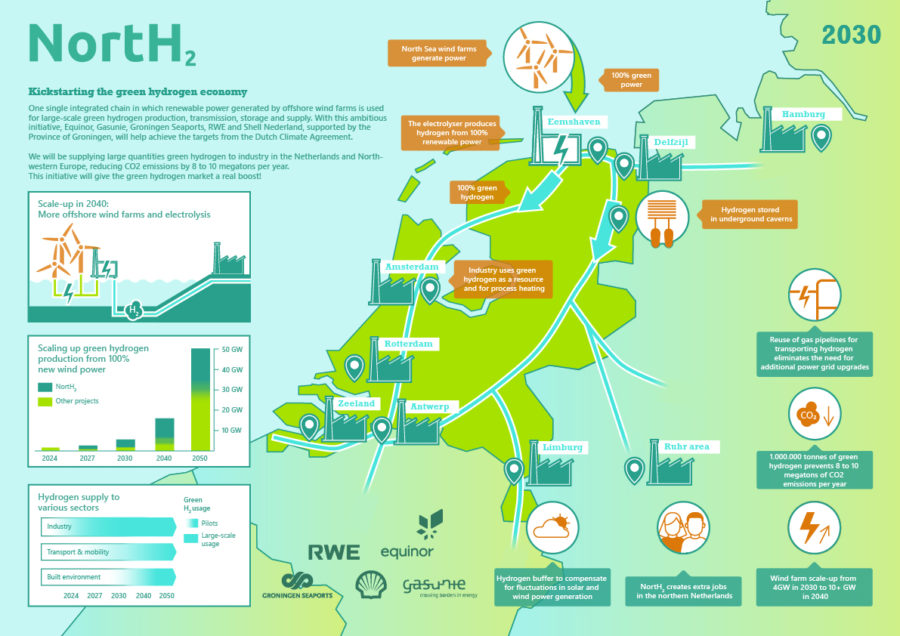 Royal HaskoningDHV has been appointed as environmental consultant by the NortH2 consortium of Shell Nederland, Gasunie, Equinor, RWE and support partners Groningen Seaports and Province of Groningen.

The NortH2 project will decarbonise industry by producing green hydrogen as a replacement for the fossil energy the industry is currently using – thus contributing to the Paris Agreement to combat climate change.

NortH2 comprises the entire green hydrogen value chain in five functional systems from source to end-user: new 10GW+ windfarms in the North Sea ca. 130 km from Eemshaven, the infrastructure to bring the power onshore, the new electrolyser plant where the energy is converted into green hydrogen, the pipelines to deliver the hydrogen to the industry clusters in Northwest Europe and underground storage of hydrogen in salt caverns to be able to match supply and demand.

Royal HaskoningDHV CEO Erik Oostwegel: “We are thrilled to be part of the ground-breaking NortH2 development. Green hydrogen has an important role in the Energy Transition and can boost the Netherlands’ and Europe’s leading position here.”

Challenges for NortH2 are related to the sheer size of the project developed by a large private-public consortium, legal requirements and (local) stakeholders.

As Permits, Consents, Environmental Impacts & Local Stakeholder Consultant, Royal HaskoningDHV will apply its knowledge and experience in similar complex projects to map NortH2’s environmental and safety aspects. It will also deliver a legal framework for all NortH2 components for construction and operation. Furthermore, Royal HaskoningDHV will deliver a roadmap for obtaining the necessary permits and consents and it will map all relevant stakeholders and environmental and social issues connected to the plans.

These deliverables are part of the Assess Phase upon which the consortium will make further decisions leading to a final investment decision – planned for 2024. The consortium hopes to produce its first green hydrogen in 2027.