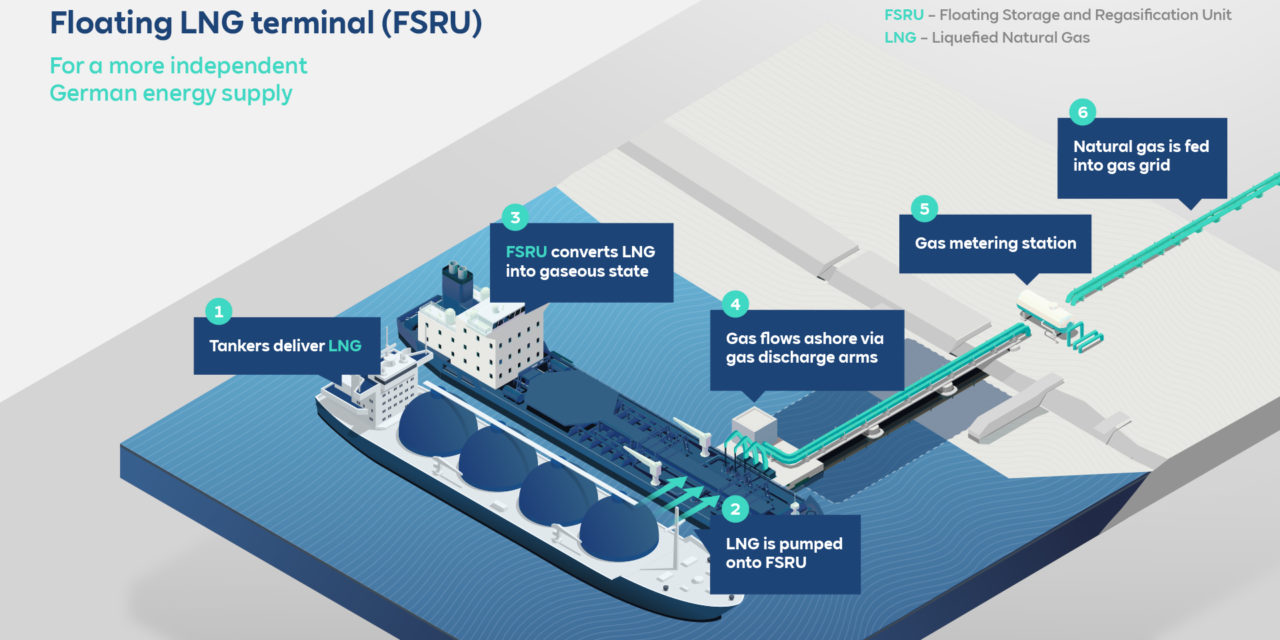 In the effort to free Germany from its dependency on Russian gas, an important milestone has now been reached: on behalf of and in the name of the German government, RWE has chartered two so-called Floating Storage and Regasification Units (FSRU). FSRUs are special ships that offer a rapid interim solution for landing liquefied natural gas (LNG) until the first LNG terminals on the German mainland are completed. RWE will also manage the operation of the vessels.

Both vessels are owned by Höegh LNG – operator of the world’s largest FSRU fleet. Each of the ships can receive up to 170,000 cubic metres of LNG via tankers in one unloading, converting it to the gaseous state on board and then feeding it into the gas grid. With the two 300-metre-long FSRUs, between 10 and 14 billion cubic metres of natural gas can be made available to the German gas market annually. By comparison, the throughput of a land-based LNG terminal is between 8 and 10 billion cubic metres per year.

The plan is for the FSRU platforms to start operating as early as next winter. For the time being, the operational responsibility for the floating facilities lies with RWE, which will make all commercial decisions concerning the use of the ships and optimise these assets in the interest of the German government. RWE will have the technical operation handled by Höegh LNG.

The framework conditions for the procurement of liquefied natural gas on the world market are the responsibility of the German government.

“On behalf of and in the name of the German government, RWE has chartered two special ships with which liquefied gas can be imported and fed directly into the German gas grid. In this way, the company is supporting the German government in strengthening the security of supply in Germany in the short term and in moving away from a one-sided energy dependency as quickly as possible. As early as next year, it will thus be possible to replace part of the Russian gas,” said Andree Stracke, Chairman of the Executive Board of RWE Supply & Trading.

The two Höegh vessels are two of four floating terminals whose charters the German government has ordered from RWE and Uniper. The next step is to determine which unloading sites are suitable. Wilhelmshaven, Brunsbüttel, Rostock or Stade came into question. A first decision has been announced today for Wilhelmshaven to become an FSRU location.