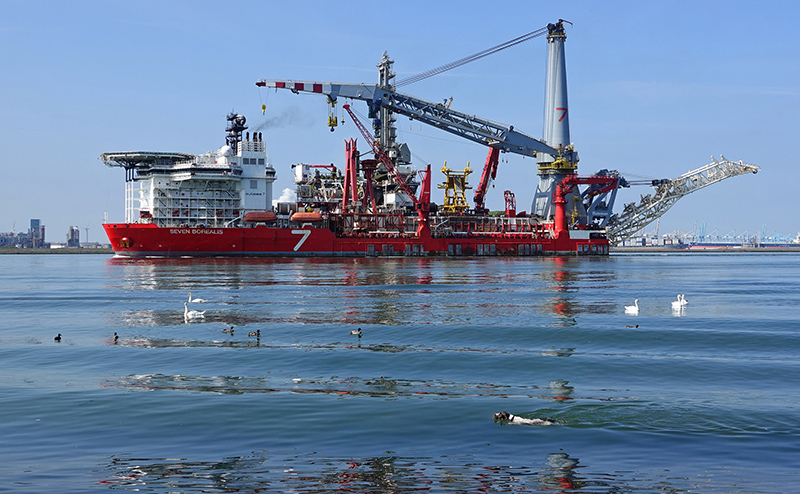 The second offshore wind farm currently being installed in France, the Saint-Brieuc marine renewable energy production site, will supply Brittany with green energy. This new source of electricity production on the territory will contribute to achieving the government objectives set by the Multiannual Energy Programs (PPE) within the framework of the national energy transition.

Emmanuel Rollin, Vice-President of Ailes Marines and Director Offshore France of Iberdrola: “Ten years after being named the winner for the Saint-Brieuc offshore wind farm, the installation of the first foundation materializes a significant step in the realization of this ambitious project for the production of renewable marine energy. When the electricity markets are experiencing extreme tensions, the Saint-Brieuc offshore wind farm – which will produce 9% of Brittany’s electricity consumption – will contribute to its energy autonomy and the essential energy transition.”

Saint-Brieuc is the first offshore wind farm in France equipped with jacket foundations. In 2014, following a consultation process undertaken with sea users and in particular with professional fishing, Ailes Marines confirmed using this foundation.
Their lattice structures have a limited impact on the environment. They facilitate the circulation of water masses and biodiversity while promoting the artificial reef effect.

These foundations with triangular bases, weighing 1,150 tons, 75 meters high and 25 meters wide, are a metal mesh fixed to the seabed by three piles 18 to 47 meters long, previously installed by the Aeolus.

For their transport and installation, a fleet of five ships is mobilized and steered from the Ailes Marines maritime coordination centre located in Pleudaniel (Côtes d’Armor):

During this phase of work, Ailes Marines is continuing with security measures and environmental monitoring. In addition, the partnership forged with CEDRE has made it possible to consolidate the anti-pollution system during the construction phase of the park, with the implementation of new protocols, means of response and equipment.

This system was successfully tested during full-scale sea exercises in the presence of CEPPOL (Centre of practical expertise in pollution control) and CEDRE at the start of 2022.

Two surveillance and information vessels are constantly on-site during this phase of the work.

In addition, the environmental monitoring measures for the work (turbidity, halieutics, marine mammals, birds, acoustics, etc.) continue during all the phases of the installation of the constituent elements of the park.

Information on the works for sea users

To inform the inhabitants and in particular, the users of the sea, Ailes Marines has opened an online information space dedicated to maritime works. It presents the nature and organization of the work, as well as information concerning navigation, in addition to the orders of the Maritime Prefecture.