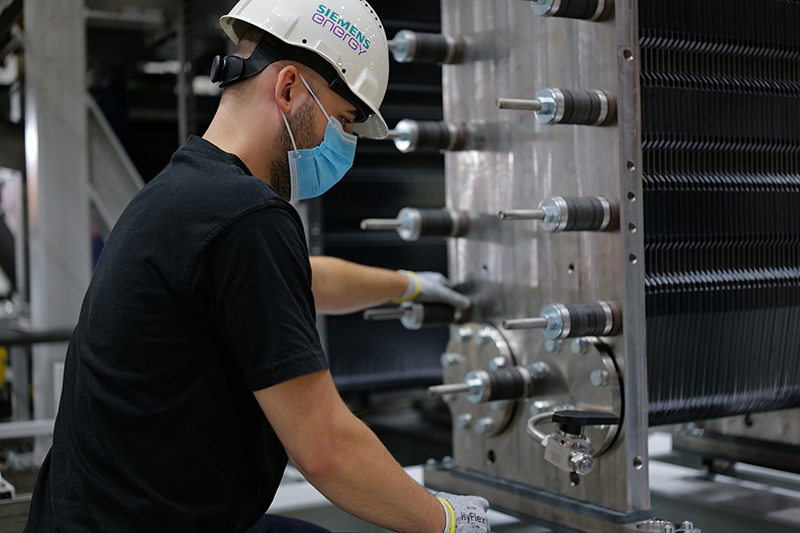 Siemens Energy and Air Liquide announce the creation of a joint venture dedicated to the series production of industrial-scale renewable hydrogen electrolysers in Europe. With two of the global leading companies in their field combining their expertise, this Franco-German partnership will enable the emergence of a sustainable hydrogen economy in Europe and foster a European ecosystem for electrolysis and hydrogen technology. Production is expected to begin in the second half of 2023 and ramp up to an annual production capacity of three gigawatts by 2025.

Air Liquide will take 25.1 percent, and Siemens Energy will hold 74.9 percent of the joint venture, which creation remains subject to approval of the competent authorities. This joint venture will be headquartered in Berlin. The joint venture multi-gigawatt factory that produces electrolysis modules (“stacks”) would be also located in the German capital, as announced earlier this year. This factory will supply stacks to both Groups for their respective broad range of customers and serve the rapidly growing market. Based on proton exchange membrane (PEM) electrolysis technology, these stacks will feature a high degree of efficiency and are ideally suited to harvest volatile renewable energy. In addition, Air Liquide and Siemens Energy have agreed to dedicate R&D capacities to the co-development of the next generation of electrolyser technologies within the framework of the partnership.

The strategic partnership will benefit from a portfolio of hydrogen projects combining both Air Liquide and Siemens Energy’s pipelines, targeting large industrial-scale hydrogen projects in collaboration with customers. This will create a solid basis for the required rapid ramp-up of electrolysis capacities and thus is expected to make competitive renewable hydrogen available sooner. One of the first projects is the Air Liquide Normand’Hy electrolyser project, with a capacity of 200 megawatts (MW) expected in the first phase, located in Normandy, France. The assembly of the electrolyser systems for this project is planned to be made in France.

“We want to be a driving force in hydrogen technology,” said Christian Bruch, CEO, and President of Siemens Energy AG. “To make green hydrogen competitive, we need serially produced, low-cost, scalable electrolysers. We also need strong partnerships. Together with Air Liquide as a pioneer in hydrogen for over 50 years, we look forward to implementing innovative solutions and collaborating to shape this new hydrogen market.”

François Jackow, Chief Executive Officer of Air Liquide, said: “The creation of this Franco-German joint venture is a major step towards the emergence of a leading European renewable and low-carbon hydrogen ecosystem. By scaling up the production of large scale electrolysers, Air Liquide and Siemens Energy will be able to provide their customers with access to large amounts of competitive renewable hydrogen and to decarbonise their activities. In line with its Sustainable Development strategy, Air Liquide is more than ever committed to making hydrogen a driving force of the energy transition and of the fight against global warming.”

The partners have and will apply for “large projects” funding under the EU’s Innovation Fund, Green Deal, and Important Project of Common European Interest (IPCEI)-scheme for hydrogen, funded by the European Governments.