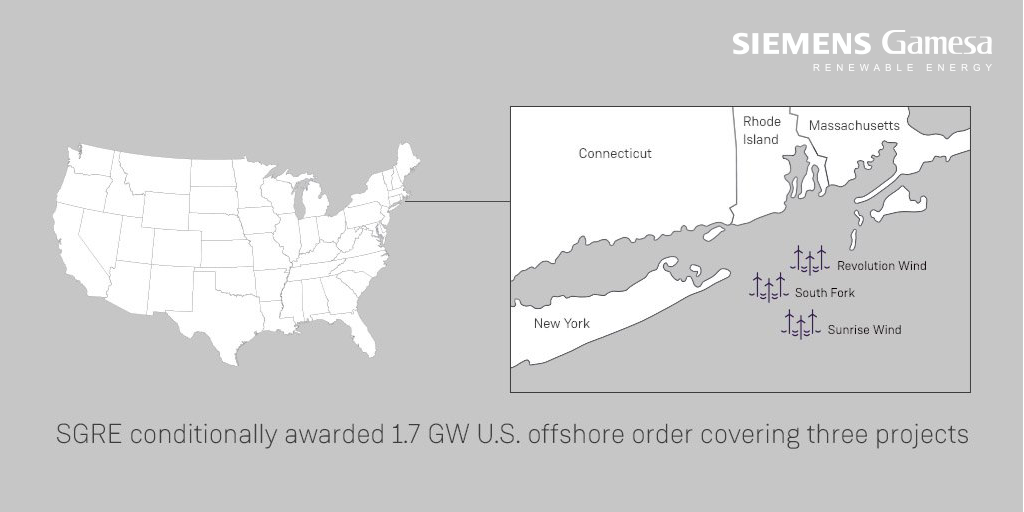 Siemens Gamesa Renewable Energy (SGRE) has conditionally received a record order for 1,714 MW from Ørsted and Eversource. Encompassing three offshore wind power projects, the signed conditional contract is the largest U.S. offshore wind power order to date. It encompasses the supply, delivery, and installation of SG 8.0-167 DD wind turbines including service agreements in federal waters off the northeastern coast of the U.S. All deliveries are subject to Ørsted and Eversource’s final investment decision.

Siemens Gamesa has been conditionally awarded the contract to deliver offshore wind turbines totalling 880 MW for the Sunrise Wind project, which will be the company’s largest offshore wind project in the U.S. Ørsted and Eversource were awarded this capacity by New York State today. SG 8.0-167 DD offshore wind turbines will be utilized at the project in federal waters about 50 km / 30 miles off Montauk Point in New York. A service agreement is included. The Sunrise Wind project is expected to be operational in 2024.

Additionally, SGRE was conditionally awarded the contract to deliver SG 8.0-167 DD offshore wind turbines for the 130 MW South Fork offshore wind power project. Located 56 km / 35 miles off Long Island, NY, it is expected to be operational by the end of 2022 and will deliver power to the Long Island Power Authority.

“An order of this size is a testament to the confidence which Ørsted and Eversource place in Siemens Gamesa. Delivering clean energy for generations to come – now on a large-scale basis in the U.S. offshore market – is a goal we are proud to share with Ørsted and Eversource. We are committed to doing so safely and with a strong focus on reducing the Levelized Cost of Energy from offshore wind in this rapidly developing market,” said Andreas Nauen, CEO of the Siemens Gamesa Offshore Business Unit.

“We had already secured a US construction pipeline of almost one gigawatt before the end of 2018 and have been looking into further growth in the US offshore wind market. We saw an opportunity to secure a bigger turbine volume early in order to gain economies of scale, and Siemens Gamesa was able to provide an attractive offering for this large volume,” says Anders Lindberg, Executive Vice President, EPC, at Ørsted.

“Siemens Gamesa has long been the global market leader in offshore wind with 12.5 GW installed. This major order signals that we are well positioned to maintain this leadership role in the budding U.S. market,” says Steve Dayney, Head of Offshore North America at Siemens Gamesa Renewable Energy. “We have always believed in the potential of this market, and with the partnership of Orsted and Eversource, we are excited to bring 1.7 GW of clean, reliable offshore wind electricity to American communities in the northeast.”

The U.S. variant of the SG 8.0-167 DD is designed for IEC class S, considering tropical storm conditions (T-Class for the Rotor Nacelle Assembly). The T-class type certification for the Rotor Nacelle Assembly will be achieved by December 2020, where the product will be certified to handle extreme wind speeds in hurricane conditions in accordance with IEC 61400-1 edition 4. Furthermore, electrical systems and components will be adapted to 60Hz operation.