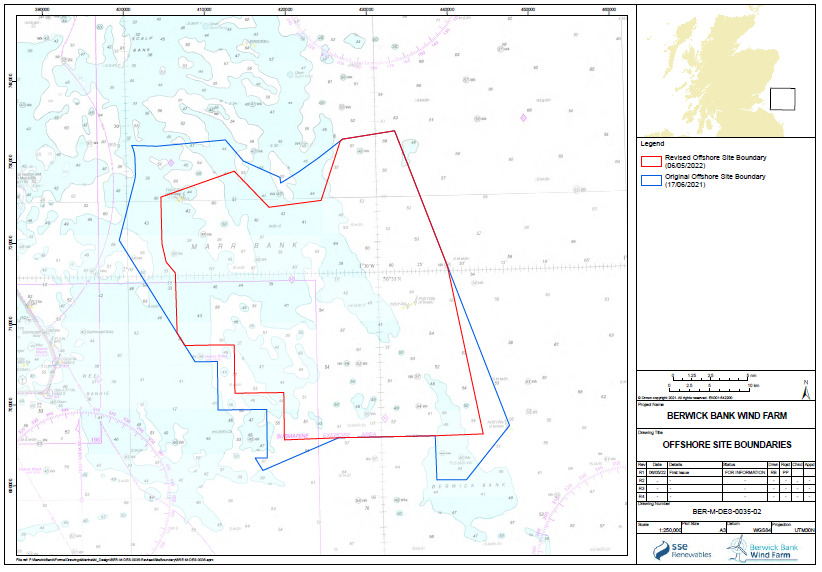 SSE Renewables has confirmed it plans to reduce the overall area for its proposed Berwick Bank Wind Farm by around 20 percent as it makes final preparations to submit the project to Scottish Ministers for planning consent. This is in addition to a previous reduction of 10 percent already made in Summer 2021.

The decision was made as part of the project’s design process following extensive stakeholder consultation, detailed ornithological studies and full environmental assessment which is nearing completion.

Although the overall area that will form the basis of the consent application is to be reduced, the capacity of green electricity that will be generated by Berwick Bank will remain unchanged at 4.1GW.

Berwick Bank will be one of the largest offshore renewable energy developments in the world and will be a major contributor towards clean energy production in the UK.

The change to the boundary is one of several measures being taken by the project to reduce potential effects on ornithology as well as benthic and shellfish ecology, fishing, shipping and navigation and represents the final step in the pre-consent design process.

Updating the Environmental Impact Assessment to reflect the new boundary and taking requests made by Marine Scotland in the Scoping Opinion will result in the consent application being made in Q4 2022 rather than Q2 as anticipated.

“Advancing Berwick Bank at its full potential capacity is essential to delivering on Scottish and UK Government offshore wind and net-zero targets as well key to securing supply chain investment in Scotland. Since the last design review in 2021 global events have only increased the need to deliver the project at maximum speed and scale.

“We are committed that this trailblazing project will play a part in addressing the nature emergency as well as the climate emergency. That is why we have been determined to propose as environmentally sensitive a design as possible.

“We have been through a detailed process of refinement to define a consenting envelope which incorporates a number of additional measures, including the boundary change, to reduce potential environmental effects – particularly in relation to ornithology. We expect this important additional pre-consent change to facilitate an efficient consent determination so we can progress Berwick Bank to delivery as soon as possible.”

“We have listened to feedback and consultation responses in the local community, especially in relation to seabirds. The boundary reduction will reduce potential effects on seabirds by reducing the footprint of the project on important foraging habitat. It also reduces the potential for barriers effects on seabirds that may access the site particularly during the breeding season.

“Ongoing analysis and emerging evidence from our existing operational offshore projects are improving our understanding of the potential effects on seabirds all the time and we will include the most comprehensive and up-to-date data in our submission in Q4.”

Along with the Section.36 planning application for Berwick Bank, SSE Renewables is seeking to work alongside the UK and Scottish Governments and other stakeholders to help restore the health of the North Sea’s marine ecosystem through a shadow derogation case including the closure of sandeel fisheries.