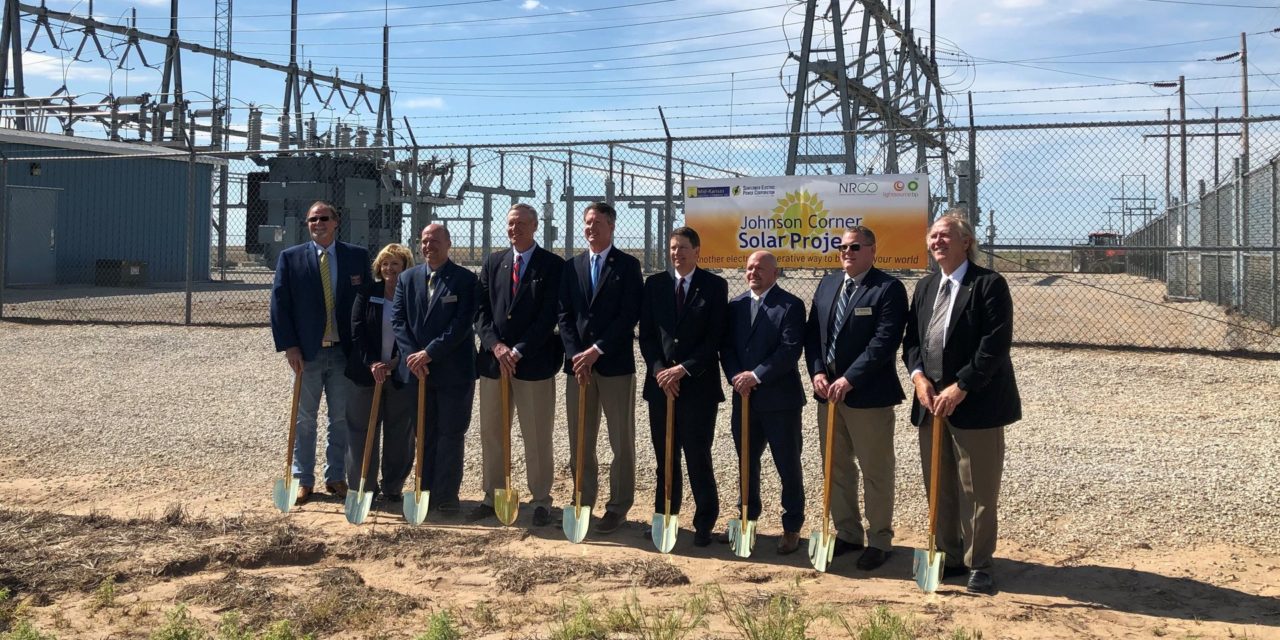 The cooperatively operated wholesale generation and transmission utility, through a commonly owned Mid-Kansas Electric Company Inc., has signed a 25-year power purchase agreement with Lightsource BP, an independent power producer that will finance, build, own and operate the solar facility.

U.S. First District Congressman Roger Marshall and dignitaries from Sunflower, Mid-Kansas, Lightsource BP and the National Renewables Cooperative Organization attended the event. “The Johnson Corner Solar Project will be the largest solar project in Kansas, and that’s definitely something to celebrate,” said U.S. Rep. Roger Marshall. “I congratulate Sunflower, Mid-Kansas, Lightsource BP, and NRCO on their successful collaboration to launch this project.”

The facility, which will be located approximately two miles southwest of Johnson City, Kan., is scheduled to be energized in first quarter of 2020.

“The solar project is an example of fuel diversification to generate electricity,” said Steve Epperson, Mid-Kansas chairman of the board and Sunflower board member. “As locally elected boards of directors, we have a responsibility to employ the right combination of traditional and renewable generation resources that protect both the affordability and reliability of electricity.”

The facility will produce approximately 55,500 megawatt hours annually, powering more than 4,900 homes across central and western Kansas and comprising one percent of the Mid-Kansas and Sunflower combined-system’s energy.

“Our system is summer peaking, which means energy demand is highest during those months,” said Stuart Lowry, president and CEO of Sunflower and Mid-Kansas. “In contrast to wind facilities, which generate the most energy during winter night hours, this project will generate energy on hot, summer days, providing protection against high market prices during those times.”

“Lightsource BP is pleased to be part of the first of what we hope are many more large-scale solar plants across Kansas,” said Kevin Christy, COO of North America for Lightsource BP. “Webelieve solar is an important part of the state’s future energy mix and a great additional source of income for Kansas farmers.”

The National Renewable Cooperative Organization with Sunflower and Mid-Kansas jointly developed the project and sourced Lightsource BP as the long-term partner.

“NRCO is pleased to have assisted its member-owner Sunflower in the development of this project,” said Todd Bartling, vice president of renewables development at NRCO. “We believe that cooperatives can bring tremendous value to their member systems by developing their own projects. We look forward to Lightsource BP reaching commercial operations.”

“Our Boards of Directors are strategic not only in what types of generation facilities our system needs, but also in location,” said Corey Linville, vice president, power supply and delivery for Mid-Kansas and Sunflower. “Locating a solar facility at our Johnson Corner Substation will reduce loading on an area transmission line that is importing energy at its full capacity and would otherwise require expensive upgrades without the local energy injection provided by the Johnson Corner Solar Project.”