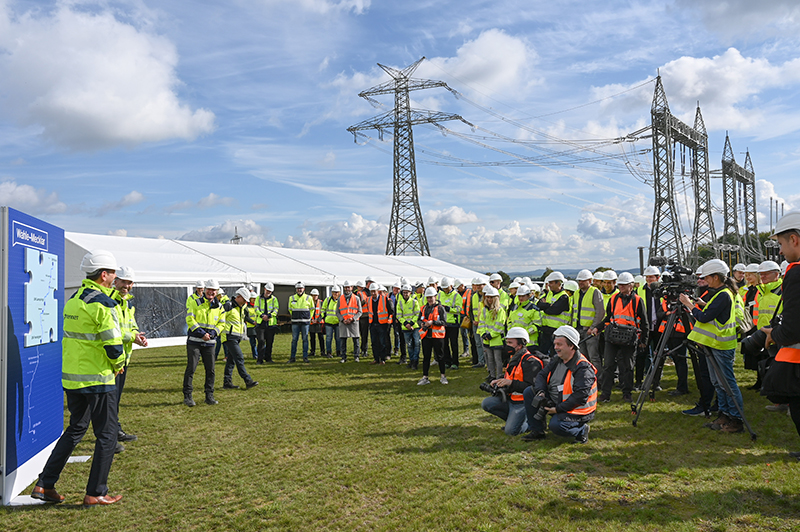 Lower Saxony’s Energy Minister Olaf Lies and TenneT COO Tim Meyerjürgens officially commissioned the first two of four sections of the currently largest 380 kV grid expansion project of the transmission system operator TenneT at the substation in Lamspringe (district of Hildesheim). From now on, electricity can flow between the Wahle substations near Braunschweig and Hardegsen near Göttingen and supply southern Lower Saxony with energy generated primarily from wind power. TenneT’s currently largest 380 kV grid expansion project is already halfway through. The event took place in the presence of numerous representatives from regional business and politics, including Lambspringe’s Mayor Andreas Humbert.

Tim Meyerjürgens said: “Today we took another big step for the energy transition and grid expansion in Germany. In good time before winter, we increase the transport capacity of wind power from the north to the south and thus strengthen the entire German high-voltage grid. From now on and on schedule, electricity can flow on the first 105 of the 230 kilometres of line.”

Olaf Lies underscored the importance of the new line: “The terrible war of aggression in Ukraine and its effects made us feel how important a secure and, above all, independent power supply is for Germany. That is why the wind energy that we produce in large numbers in Lower Saxony must also arrive where it is needed – especially in the south of the republic. The partial commissioning of Wahle-Mecklar, therefore, comes as a positive signal at the right time in these challenging times.”

The construction work on the high-voltage line began in March 2018 near Einbeck after an intensive approval and participation phase of almost ten years. The 105-kilometre section that has now been put into operation runs on 237 overhead power line pylons. This section also includes Germany’s longest AC underground cable route at extra-high voltage, at 13 kilometres, between Lesse (Salzgitter) and Holle (district of Hildesheim). The overall commissioning of the line, i.e. including the section between Hardegsen and Mecklar (near Bad Hersfeld, Hesse), is planned for 2024. The line will then also supply northern Hesse with green electricity.

background
The high-voltage line will connect the grid nodes at the Wahle and Mecklar substations. The approximately 230-kilometre-long line increases the transmission capacity for wind energy on the north-south axis and will ensure security of supply and grid stability in Lower Saxony and northern Hesse in the future. Along the route, the line will be integrated into the new Lamspringe substation and the extended substation in Hardegsen. The line thus supplies the regions along the way and strengthens the entire German high-voltage grid. The comprehensive project also includes the connection of the Erzhausen pumped storage power plant, a strategically important building block for a secure energy supply.