TenneT puts power line between Emden and Conneforde into operation 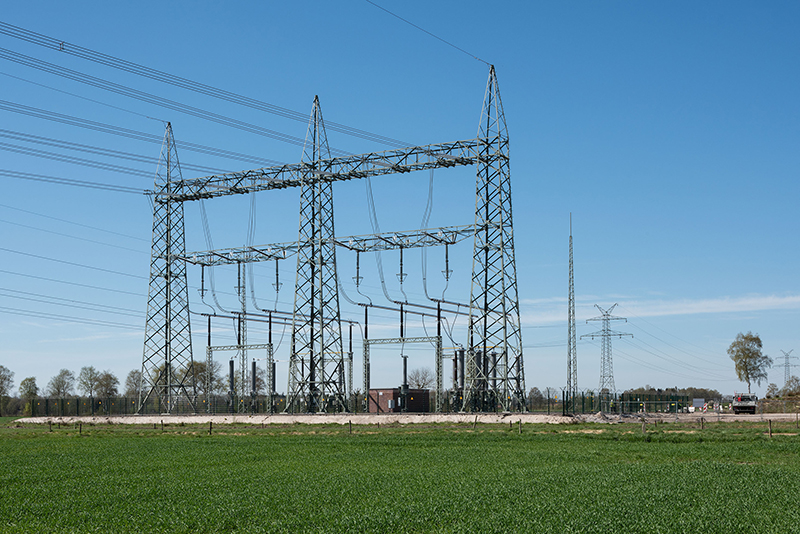 Lower Saxony’s Energy and Climate Protection Minister Olaf Lies and Tim Meyerjürgens, COO of the transmission system operator TenneT, today officially put the new 380 kV power line between Emden and Conneforde (Ammerland district) into operation. In the presence of numerous representatives from business, administration and politics, including Sven Ambrosy, district administrator of the district of Friesland, the two also lent a hand personally: to start the dismantling of an overhead line mast of the old existing line that was no longer needed.

“The new line can transmit three and a half times as much electricity as the previous one,” said Tim Meyerjürgens. “Above all, it will transport and distribute wind power from the North Sea – and it is immensely important: the heads of government of the Netherlands, Germany, Denmark and Belgium have just agreed at their summit meeting on offshore energy in Denmark to jointly transform the North Sea into a ‘ green power plant’ for Europe. In order for this to succeed, we not only need the accelerated expansion of wind energy at sea, but also strong power lines on land like this one, which we are officially putting into operation today.”

Olaf Lies emphasized: “The north plays a central role in the climate and energy transition and in supplying Germany with climate-friendly energy. With 70 gigawatts of installed capacity, we have set ourselves ambitious goals for the expansion of wind power at sea. Wind power as a whole represents a clean, long-term cost-effective and, above all, independent energy supply. We are now experiencing more than ever the value of this independence. However, we will only achieve this if we also make rapid progress with the expansion of the networks. TenneT is an important partner for grid expansion in Germany and has shown between Emden and Conneforde at what speed construction can take place once approval has been granted. We need this completely new German speed for all our infrastructure measures in the energy sector. The LNG Acceleration Act recently passed by the federal government must therefore be the benchmark for acceleration projects in the area of ​​renewables and, above all, the grids. That is now the task of politics.”

With the completion of the new high-voltage line between the Emden/Ost and Conneforde substations in just two and a half years, TenneT has now reached an important milestone in the energy transition. The 61-kilometre-long 380-kV line replaces the previous 220-kV line, whose capacity is no longer sufficient for the increasing amounts of energy. The course of the new line is largely based on the existing line. In some areas, however, the new power line deviates from this in order to relieve the burden on towns and nature reserves. With the Timmel bypass, this district and the adjacent local recreation area Timmeler Meer are largely bypassed. The Herrenmoor nature reserve is now free of power poles thanks to the new replacement building.

The new line runs underground in two sections. TenneT laid the new line as an underground cable over a length of around two and a half kilometres near Strackholt (Grossefehn municipality). And at Bockhorn, an approximately three-kilometre-long underground cable section replaces the existing overhead line, which is currently being dismantled.

During the official commissioning of the line, Olaf Lies and Tim Meyerjürgens together loosened a screw connection on a dismantling mast near the Bredehorn/East cable crossing system (Bockhorn municipality). Overhead line fitters then climbed onto the mast, secured with harnesses, and loosened the screw connections below the upper mast traverse. The top floor of the steel lattice mast was then lifted off with a truck-mounted crane and placed on a work surface for further disassembly. By the end of June, TenneT will dismantle a large part of all the pylons of the existing line – just a few weeks after the new line is commissioned.

In order to reliably transport the increasing amounts of electricity from renewable energies to consumers, the transmission system operator TenneT is continuously expanding its electricity grid. Since April 6th of this year, the new 380 kV line Emden/East – Conneforde has been transporting green energy from onshore and offshore wind power safely and reliably to consumers. The new line runs from the newly built substation in the east of the city of Emden through the communities of Moormerland and Uplengen in the district of Leer. The line then continues through Ihlow, Großefehn and Wiesmoor (Aurich district), Zetel, Bockhorn and Varel (Friesland district) and through the municipalities of Westerstede and Wiefelstede in the Ammerland district to the Conneforde substation.

A complex planning process preceded the construction and commissioning of the new line. Before and during the process, TenneT conducted an intensive dialogue with the cities, municipalities and districts as well as the interested public and the landowners along the new line. TenneT would like to continue this dialogue with other line construction projects in the region – such as the Wilhelmshaven2 – Conneforde line.