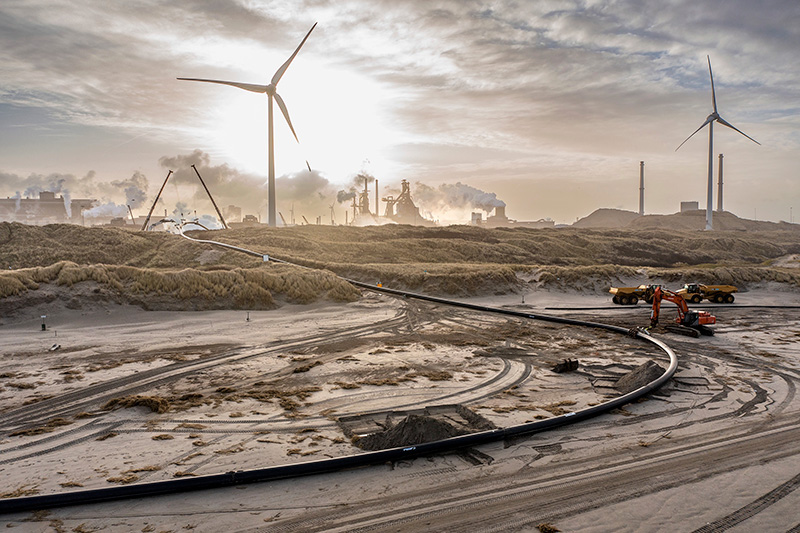 After the official handover/survey by Rijkswaterstaat, Hoogheemraadschap Hollands Noorderkwartier and the municipality of Heemskerk, the work site on the beach was handed back empty by TenneT. This formally brought an end to 14 months of work at a special site for the connection of the offshore wind farms.

The highlight was surely the ‘temporarily largest sand castle in the Netherlands’, built last year on the beach at Heemskerk for drilling under the dunes. This fortress allowed contractor NRG to continue working unhindered even during the storm season. As much as 41,000 cubic metres of sand were used by contractor NRG or the weight of almost ten adult elephants.

Sand on the beach

Between 130 and 170 dump trucks drove daily between Zuiderbad and the work site for the sand, which was brought over the beach. This ‘train’ brought in between 2,500 and 4,000 cubic metres of beach sand daily. After the four successful borings under the dunes and the withdrawal of the empty casing tubes, the sand was smoothed out at beach post 49 in Heemskerk in February this year.

The work sites (on either side of the dunes) were then handed over to Belgian contractor Jan de Nul Group for another special operation; the retraction and installation of the four sea cables for Hollandse Kust (North) and (West Alpha). These cables were collected from South Korean manufacturer LS Cable & System.

With Jan de Nul, a new crowd puller, arrived on the beach. So on 10 May – after a nocturnal trip across the seabed – the cable-laying machine Moonfish drove onto the beach at Heemskerk in the early morning hours. With its long water blade, this ‘futuristic water creature’ looked like it had been ridden straight out of a Jules Verne novel. The night before, the unmanned robotic vehicle was jettisoned from the lifting vessel MPI Adventure three kilometres off the coast.

With over sixty kilometres of marine cable on board, contractor Jan de Nul’s cable-laying vessel Connector appeared off the coast of Heemskerk/Wijk aan Zee this week. This cable section will make the first connection up to TenneT’s Hollandse Kust ‘socket’ (West Alpha). The second cable connection for the wind farm will follow in the first quarter of next year.

“The cable connections for ‘north’ have now been completed and tested,” project director Arjan Dams informed on behalf of TenneT. “While work continues for west Alpha at sea, the beach has been cleared and delivered again. After 14 months of working in this special place, we are now handing the beach back to the environment and the competent authority. Together, we can look back on an exceptional project with major technical challenges. As the client, we are extremely pleased with that,” Dams said.

Besides trust and the red info container, TenneT and contractor NRG are also taking the lessons learned to work on Hollandse Kust (west Beta). To connect this third wind farm, work will start next autumn on the beach south of Wijk aan Zee. Similarly, a temporary ‘sand castle’ will also be erected on the beach in the municipality of Velsen. However, this construction will be half the size, as it will only involve two sea cables to be drilled under the dunes.

Arjan Dams: “The fact that we were able to carry out our work well, safely and on schedule in recent months is partly thanks to the good cooperation with the surrounding area. I want to thank the residents, beach operators, beach house owners, municipalities, KNRM and other authorities enormously for the way in which we successfully worked together. In the spring, we will gladly return to the beach here at Noorderbad. Without machines, but with a fun festivity for young and old, as a token of our appreciation. What and when we will let you know yet.”