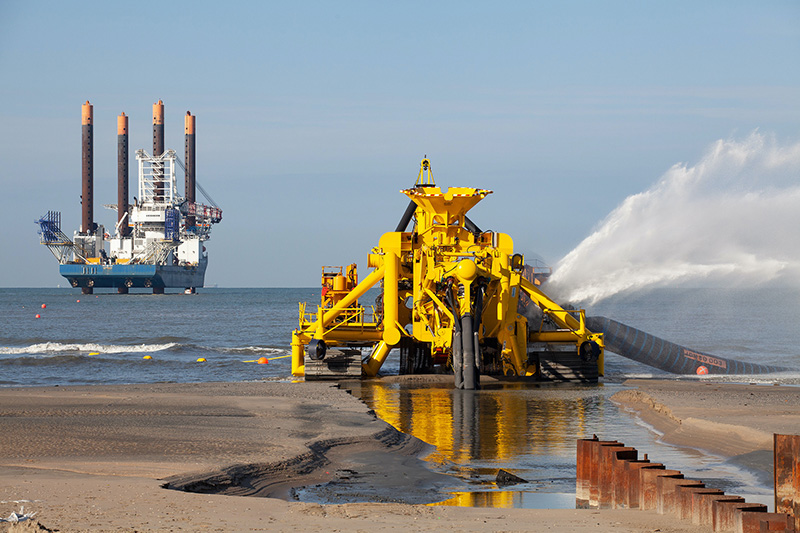 Both TenneT’s sea cables for Hollandse Kust (north) and the cables for (west Alpha) have been laid at the bottom of Heemskerk beach and in the seabed by contractor Jan de Nul Group. This concludes the job for the intertidal trenching vehicle Moonfish off the coast of North Holland. The first of the two front cables (West Alpha) will be sailed from South Korea to the Netherlands before the end of the year. Upon arrival, cable laying will start immediately.

Earlier this week, the last two of four sea cables (220kV) were also buried by contractor Jan de Nul. These cables are intended for the connection of the Hollandse Kust wind farm (West Alpha). These cables are now almost 6 km each ‘capped’ in the seabed. Once the rest of the cables are brought to the Netherlands, the sections will be connected with a socket connection at sea.

Jan de Nul Group will then lay the rest of the cables up to the socket at sea. For west Alpha, that socket will be located about 50 kilometres off the coast of Egmond aan Zee. Because the cables cannot be laid as the crow flies, these cables will each be 70 kilometres long in total.

For Hollandse Kust (north), the transformer platform is now 18.5 kilometres off the coast of Egmond aan Zee. The sea cables for ‘north’ are already ready in the seabed. Behind the dunes near Heemskerk/Wijk aan Zee, the four sea cables will be connected to the cables that will soon feed the electricity into the high-voltage substation along the A9 in Beverwijk.

Earlier this month, the topside (superstructure) for ‘north’ was successfully placed on the jacket (undercarriage). Next to the socket at sea is a jackup barge with a walkway to the platform. A team of some 50 mechanics/installers will stay on the vessel for the next few months. They will weld the topside to the jacket and carry out the rest of the installation, testing and commissioning.

On Monday 17 October, the first monopile for the offshore wind farm Hollandse Kust Noord was placed. This marked the start of the construction of the wind farm. Commissioned by CrossWind (a joint venture between Shell and Eneco), Van Oord will install the monopiles for the wind farm in the coming months. These will form the foundations of the wind turbines. Installation of the monopiles is expected to be completed by mid-2023.

Before the end of this year, TenneT plans to test the fibre-optic connection for ‘north’, which was laid together with the sea cables, and the high-voltage connection. It can then be used to control the socket and wind farm. In the course of next year, the platform (with a capacity of about 700 megawatts) will be ready, and TenneT will make renewable energy from the wind farm available to households, businesses and industry.