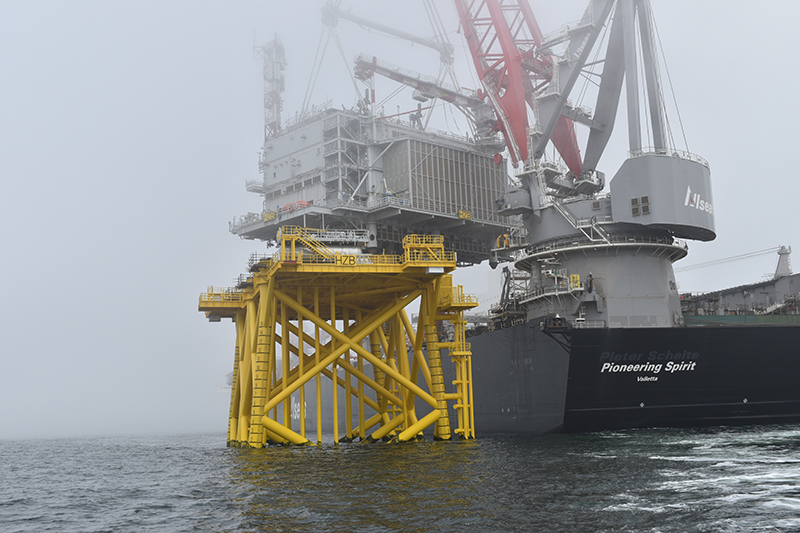 Made in Dubai
Over the past years, contractor Petrofac has been working on the fabrication of two High Voltage Alternating Current (HVAC) transformer stations – also called topsides – Alpha and Beta at the Drydocks World fabrication yard in Dubai. The Alpha topside was installed on the jacket in the North Sea, about 20 kilometres off the coast of The Hague, on Sunday, December 26th 2021. Sister topside Beta left the fabrication yard in Dubai last February and sailed on a Boskalis transport vessel in little over one month to the Alexiahaven on the Maasvlakte, where it arrived last week.

Significant milestone in the delivery of this important energy transition project

Sami Iskander, Petrofac Group Chief Executive: “The safe installation of the Beta topside is a significant milestone in the delivery of this important energy transition project. Everyone involved should be proud of this achievement.”

Marco Kuijpers adds: “I am very pleased that the project was installed safely and I compliment Petrofac and Allseas with this. Wind energy plays a crucial role in the energy transition, also in industry, and I am proud that TenneT, together with our partners, can contribute to a sustainable future in this way.”

Renewable energy from the North Sea to the high voltage grid on the Dutch mainland
The green energy generated by the wind turbines in the North Sea is collected at an offshore transformer station. The voltage is converted from 66 kV into 220 kV. The electricity is then transported to land via cables in the seabed and is landed at an electrical substation at the Maasvlakte. At this substation, the voltage is converted into 380 kV. Finally, the electricity is transported to the high voltage grid via the high voltage station Randstad 380 kV Zuidring.

Offshore green energy by the end of 2023
By the end of 2023, TenneT will have constructed 3,500 MW offshore grid connections for offshore wind farms in the Dutch North Sea. The first 1,400 MW has been realised with the delivery of Borssele Alpha and Beta in 2019 and 2020. It will now be the turn of Hollandse Kust (zuid) Alpha and Beta this year, followed by Hollandse Kust (noord) in 2023. TenneT is using five identical 700 MW transformer platforms for these wind farms. These platforms are located close to the wind farms and all five use the same type of 220 kV cable connection to the coast. Such standardisation enables TenneT to complete these projects more efficiently, more quickly and more economically.

Towards 2030, the Dutch and German governments will set new targets for offshore wind. The Dutch government recently announced new areas and targets with a total installed capacity of 20,7 GW around 2030. In Germany, on top of the already increased ambitions new offshore wind targets will be announced soon.