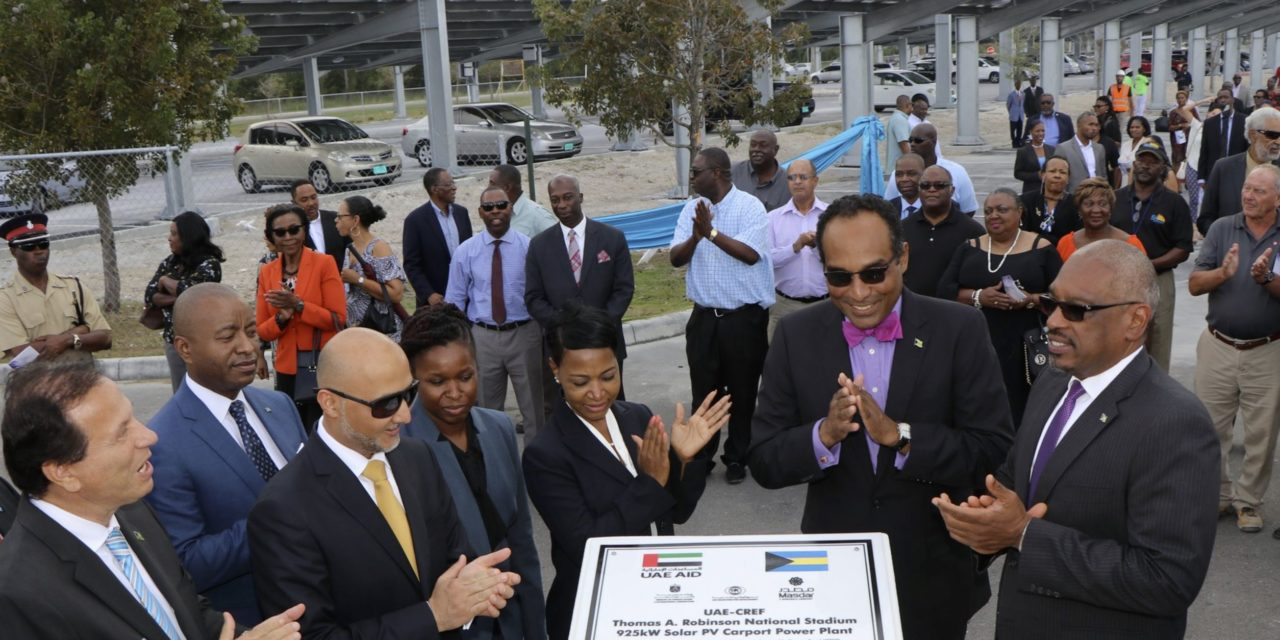 Three climate-resilient solar power projects in the Bahamas, Barbados, and Saint Vincent and the Grenadines are being inaugurated this week under the US$50 million UAE-Caribbean Renewable Energy Fund (UAE-CREF), the largest renewable energy initiative of its kind in the region. The fund is a partnership between the UAE Ministry of Foreign Affairs and International Cooperation, the Abu Dhabi Fund for Development, and Masdar (Abu Dhabi Future Energy Company).

In total, the three projects, which broke ground in November 2018, will deliver 2.35 MW of solar and 637 kWh of battery storage capacity, while displacing more than 2.6 million tonnes of carbon dioxide annually. Combined, they will also achieve diesel savings of more than 895,000 litres per year, worth about US$1.1 million. The Bahamas, Barbados, and Saint Vincent and the Grenadines face some of the highest power costs in the world, due to their reliance on diesel. All three projects are designed to withstand up to 160 mile per hour winds and extreme weather, per a new requirement instituted in the UAE-CREF in the wake of Hurricanes Irma and Maria. The projects will be inaugurated by HE Bader Almatrooshi, UAE Ambassador to Cuba, Haiti, and Jamaica and Representative to the Association of Caribbean States.

He added: “Together with our strategic partners – the UAE Ministry of Foreign Affairs and International Cooperation and Masdar – we are proud of the timely delivery of three of the UAE-CREF projects. We are confident that these projects will continue to drive socio-economic benefits to local communities in the Bahamas, Barbados, and Saint Vincent and the Grenadines.”

The three projects all represent significant steps forward in realising the three countries’ renewable energy ambitions. In the Bahamas, which hopes to generate 30 per cent of its power needs from renewable sources by 2030, the Thomas A. Robinson National Stadium 925kW Solar PV Carport Power Plant will displace 310,000 litres of diesel per year, saving the government US$350,000 and offsetting 856 tonnes of carbon dioxide annually. The project is the largest-ever solar plant to feed into the national grid and sets a critical regulatory precedent for future private development. The project was developed in partnership with the Bahamas Ministry of Environment and Housing, with initial concept work by the Rocky Mountain Institute. In addition to power generation, it also serves as a carport with 342 parking spaces, including two spaces that are equipped with fast-charging electric vehicle charging stations.

In Barbados, the government aims to generate 100 per cent of its energy from renewable sources by 2030. As part of this target, the Bridgetown 350kW Solar PV Carport Power Plant and Bow Manston 500kW Solar PV Power Plant in Barbados are expected to save US$381,000 per year by displacing 265,000 litres of diesel fuel and 975 tonnes of carbon annually.

In Saint Vincent and the Grenadines, the project – with 600kW of solar PV and a 637 kilowatt-hour (kWh) lithium-ion battery – is unprecedently able to supply 100 per cent of Union Island’s daytime power requirements. The plant alone also meets over 30 per cent of Union Island’s energy needs and will displace 320,000 litres of diesel fuel per year, saving the island US$368,000 and offsetting 825 tonnes of carbon annually. The hybrid plant was developed in partnership with St Vincent Electricity Services Limited (VINLEC), again with initial concept support from the Rocky Mountain Institute. With its combination of solar PV and battery, the project also provides a model for high penetration of renewable energy on small outer islands, which can dramatically reduce their crippling power costs. The government has set a target to generate 60 per cent of the country’s energy from renewable sources by 2020.

“Masdar is pleased to leverage its global expertise and experience in renewables to support the Caribbean’s sustainable energy transition, as well as its climate resilience,” said Masdar CEO Mohamed Jameel Al Ramahi. “These landmark solar projects will pave the way for further investments in clean energy across the countries. By delivering tailor-made solutions to address the specific energy needs of each country in partnership with their governments, Masdar is fulfilling its mandate to deliver on the UN Sustainable Development Goals and ensure sustainable energy for all.”

The UAE-CREF was launched in 2017 on the sidelines of the annual assembly of the International Renewable Energy Agency (IRENA), under the umbrella of Abu Dhabi Sustainability Week. The fund intends to deploy renewable energy projects in 16 Caribbean countries in three cycles to reduce energy costs, increase energy access, and enhance climate resilience. The Bahamas, Barbados, and Saint Vincent and the Grenadines constituted the first cycle, while a number of second cycle countries are shortly going into procurement, including Antigua and Barbuda, which will see the rebuilding of the power system on hurricane-devastated Barbuda. The third cycle of the fund was announced in January 2019.