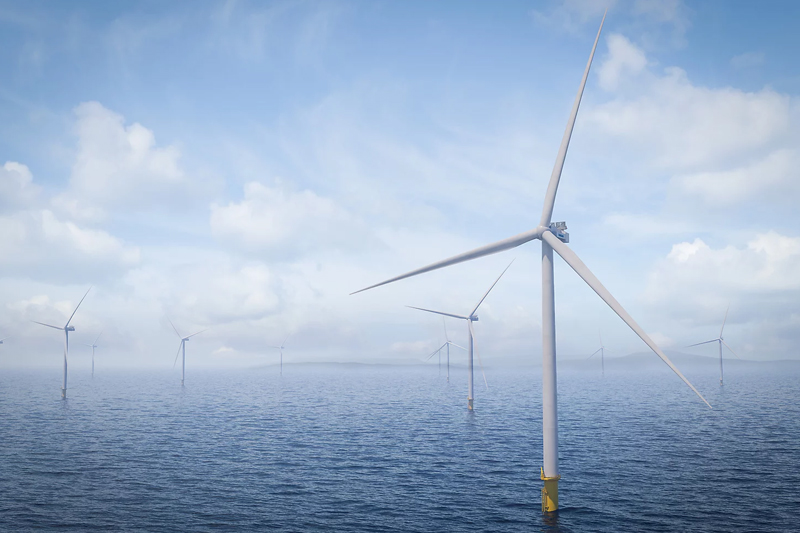 Offshore wind energy is rapidly expanding to all parts of the world, and advancements within floating foundations enable offshore wind power to serve new markets. In many countries, especially the Asia Pacific region, floating wind is considered a crucial driver to achieve their renewable energy goals because regional geographic characteristics and weather conditions, such as deep coastal waters and frequent earthquakes and typhoons, don’t favour offshore wind turbines on conventional bottom-fixed foundations.

With the introduction of the V236-15.0 MW wind turbine, Vestas is playing a leading role in the expansion of offshore wind. As the next step of our journey in offshore wind, Vestas has announced that MunmuBaram, a joint venture between Shell and HEXICON AB, has named Vestas as the preferred turbine supplier for the 1.3 GW MunmuBaram floating offshore wind project in South Korea.

If the project materialises, Vestas will supply and install 84 units of the V236-15.0 MW turbine for the project, located off the southeast coast of South Korea. The turbines will be installed on floating foundations in the project area of approximately 240km2 with water depths ranging between 120 and 150 metres. This will mark the first announced large-scale floating offshore project for Vestas, and the first announced project of V236-15.0 MW for installation on floating foundations.

“We are honoured to have been selected as preferred supplier for the MunmuBaram floating offshore wind project and the trust that the customers placed in Vestas. We are excited to engage in this innovative project that spearheads the global offshore wind industry and underlines our ambition to partner with customers and suppliers to make floating offshore wind energy profitable, scalable, and serviceable. Vestas continues its ambition to be a leader in offshore wind, and we remain committed to contribute to South Korea’s clean energy target in close partnership with our customers,” says Purvin Patel, President of Vestas Asia Pacific.

“Vestas will open a new frontier of offshore wind by providing our V236-15.0 MW turbines as the best solutions for this milestone floating project. We will deliver the unparalleled competitiveness of Vestas’ technology combined with our experience in floating wind project execution to strengthen our customers’ business case for the project. As the largest announced floating project worldwide, MunmuBaram will place South Korea as a leading country in floating offshore wind”, says Srdan Cenic, Country Manager of Vestas Korea & Vice President, Head of Sales Offshore of Vestas Asia Pacific.

With this project, MunmuBaram and Vestas are together taking a leading role in South Korea’s offshore wind industry development and bringing the country one step closer to achieving its Net-Zero emissions goal.

Once installed, Vestas will also deliver 20-year service and maintenance for the wind farm. By establishing a dedicated local service organisation, Vestas will contribute to local job creation and provide high-level training for offshore service technicians.

Vestas has installed more than 8 GW or more than 1,500 offshore turbines globally. Vestas has also installed turbines on floating foundations for over a decade, including projects off the coasts of Scotland and Portugal. The MunmuBaram project is Vestas’ third partnership with Shell, following the 730 MW Borssele III/IV offshore wind project in the Netherlands and the Atlantic Shores’ 1.5 GW offshore wind project in the USA which will also feature V236-15.0 MW turbines.

If and when the agreement with the MunmuBaram project materialises in a firm order for Vestas, Vestas will disclose the order in a company announcement in accordance with the company’s disclosure policy.