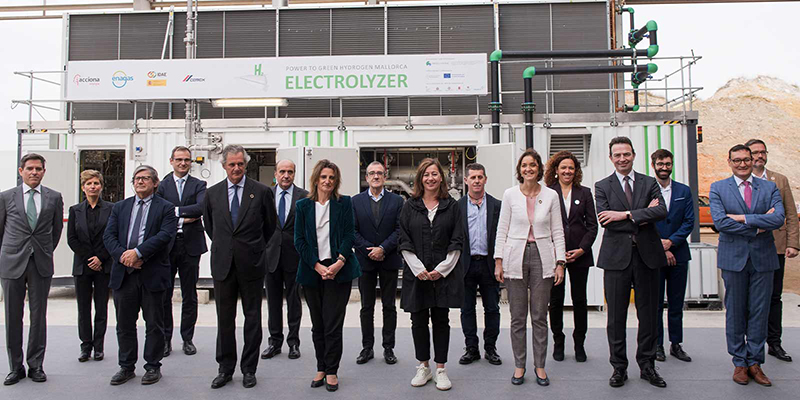 Spain’s Third Vice President of the Government and Minister for Ecological Transition and the Demographic Challenge, Teresa Ribera, inaugurated the first industrial renewable hydrogen plant in the country today. The plant is located in Lloseta (Mallorca), and it has been developed within the Power to Green Hydrogen Mallorca project that is led by Enagás and ACCIONA Energía, in partnership with CEMEX and IDEA.

The Vice President was accompanied by the Minister of Industry, Trade and Tourism, Reyes Maroto, and the Director General of IDAE, Joan Groizard. In addition, the Chairman of CEMEX EMEA, Sergio Menéndez Medina, the CEO of ACCIONA Energía, Rafael Mateo, the CEO of Redexis, Fidel López Soria, and Sabina Fluxá, Vice President and CEO of the Iberostar Group were also present at the inauguration.

COMMISSIONING OF THE LLOSETA PLANT

The industrial production of renewable hydrogen at the plant will be carried out gradually and based on the availability of infrastructure and equipment for its consumption within the European-funded project Green Hysland, of which Power to Green Hydrogen Mallorca is part.

The Green Hysland project, coordinated by Enagás, supports the deployment of the necessary infrastructure to build a renewable hydrogen ecosystem on the island of Mallorca, helping to achieve the environmental objectives set by the Balearic Government on the islands. The European Union granted €10 million for the project implementation through the Clean Hydrogen Joint Undertaking.

This European investment is in line with the new EU Hydrogen Strategy and with the Spanish Government’s “Hydrogen Roadmap: a commitment to renewable hydrogen”. The grant is the second largest one awarded by the EU to a green hydrogen project, and the first one given to a Mediterranean country.

In the words of the Vice President of the Government and Minister for Ecological Transition and Demographic Challenge, Teresa Ribera, “this pioneering project inaugurates a technological development that will be very relevant in the coming years, to replace gas of fossil origin with renewable gases, such as biogas, biomethane, and hydrogen obtained with renewable energies. Thanks to these advances, which we are promoting with the PERTE ERHA, we will reduce our dependence on hydrocarbon imports, we will offer a solution for the decarbonisation of sectors that are difficult to electrify, such as industry or heavy transport, and we will create new companies and new jobs in quality. Now, more than ever, we must activate all the springs to gain energy sovereignty, and renewable energies are going to play a decisive role. And among them, hydrogen constitutes a strategic bet for the country”.

The President of the Balearic Government, Francina Armengol, has emphasised that: “With this project, the Balearic Islands continue to be at the forefront of the energy transition in Spain and continue to set the pace just as they did with pioneering regulations such as the waste law, which abolished single-use plastics, or the exchange law climate”. In addition, the President has defended the Power to Green project as an example “of the transformation of the economic and social model that the islands are promoting, a more diverse, more resilient and more sustainable model.”

The President of ACCIONA Jose Manuel Entrecanales pointed out that: “Green hydrogen is an industrial and economic opportunity for Spain and Europe. The public-private collaboration in this project and the support of the different administrations represent a model of how to maximise the outcome of such opportunities. The Mallorca project will allow to improve technology and develop a business model based on renewable hydrogen that will make a qualitative breakthrough in decarbonisation.”

According to the Chairman of Enagás, Antonio Llardén: “Projects such as Green Hysland and its set up in Mallorca demonstrate the importance of coordinating and cooperating to move the decarbonisation process forward. Thanks to the 30 entities that are part of the consortium, the entire value chain is represented in the project, which ensures both the deployment of infrastructure for the production of green hydrogen and its end uses.”

The Executive Director of the Clean Hydrogen Joint Undertaking, Bart Biebuyck, added that: “The Green Hysland project on the island of Mallorca is a perfect example of how a hydrogen ecosystem can effectively contribute to the decarbonisation of European islands. We are proud that the first hydrogen hub in Southern Europe will become a reality with our support of €10 million, and we are convinced that it will serve as a model for similar hydrogen valleys all over Europe.”

The electrolyser that produces the renewable hydrogen is a core part of the project and it has already completed technical commissioning tests. It will be fully operational as soon as the deployment of the infrastructure for its consumption is completed, and it will produce at least 300 tonnes of renewable hydrogen per year.

The photovoltaic plants of Lloseta (8.5MW) and Petra (5.85MW) will supply the renewable electricity needed to power the electrolyser. The GreenH2Chain platform, developed by ACCIONA Energía, will use blockchain technology to accredit that the hydrogen obtained in the plant is 100% renewable.

USE OF GREEN HYDROGEN IN MALLORCA

The goal is to reduce the island’s CO2 emissions by up to 21,000 tonnes per year once the green hydrogen ecosystem in Mallorca is fully implemented. Part of the green hydrogen will be transported through the first hydroduct in Spain, which Redexis will build on the island. This hydroduct can be injected into the natural gas distribution network that the company has in Palma de Mallorca. This will contribute to the decarbonisation of the island’s consumption. The administrative processing phase is currently being completed and the company will be able to start construction in the second quarter of the year.

Green hydrogen will have multiple applications on the island of Mallorca, such as the supply of clean fuel to bus fleets, heating and electric power generation for commercial and public buildings, and the creation of a refuelling station.

The business sector is also taking part in the deployment of this clean energy ecosystem. As an example of this, the Iberostar hotel group has reached an agreement to replace part of its natural gas consumption with renewable hydrogen.

Other industrial economic sectors and the mobility sector, as well as public and private entities, will foreseeably join the use of this renewable energy. That would strengthen the project and boost the reindustrialisation of Lloseta and its surroundings with new projects that are compatible with the already existing activities.

Mallorca is in an ideal position to develop the first renewable hydrogen hub in Southern Europe, thus becoming the first European example of an island economy based on green hydrogen.

The project also encompasses a Social Impact Management program in the area surrounding the plant. One of the actions already carried out is the donation of 44 photovoltaic modules to the Lloseta City Council for municipal self-consumption.

Power to Green Hydrogen Mallorca will also develop a strategy for social investment based on education, the promotion of the local economy and innovation. Some of the actions proposed within this strategy include open days and educational visits to the plant. In addition, a series of calls will be launched after the summer to receive proposals for social projects that derive from the needs of the population.